From Uncyclopedia, the content-free encyclopedia
(Redirected from Washing machines)
Jump to navigation Jump to search

For those without comedic tastes, the so-called experts at Wikipedia have an article very remotely related to Washing machine. 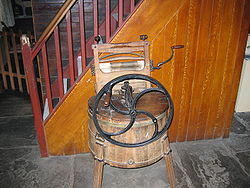 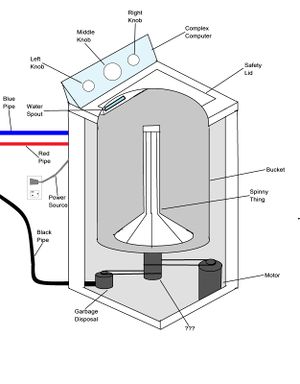 A washing machine (laundry machine, clothes washer, or washer) is a machine to wash laundry, such as clothing and sheets. The invention of such a machine revolutionized our lives because we can now urinate in our clothes and have them good as new in a matter of hours. Without this invention women would be still slaving away at a scrub board which is excellent for their hands and knees, the washing machine makes life a lot easier, you can just go into to the laundry , dump your clothes into the machine and let it go, it is a very good invention.

Alternatively, some dangerously insane historians have theorized that the modern version of the washing machine that we know of today was actually invented by Abraham Lincoln in 1922 as a torture device for slaves. It originally consisted of a large frame in the shape of a "maiden" that was made completely out of a substance called "iron", and the inside was coated with razor-sharp adamantium spikes. It should not be confused with the Iron Maiden, which at that time was used to wash clothes that became bloodied by being in the washing machine.

The washing machine has been recognized by the Board of Complex Machinery to be the most complex machine ever designed by Abraham Lincoln. Only 5 people in history have been able to successfully operate one, and this is why people are forced to buy new clothes all the time. However, with enough training, one can be taught to use this machine at a rudimentary level.

Use as a teleportation device[edit]

Due to the fact that a washing machine spins at over 17,000 cycles per second, the magnetic field generated will create a hyper-dimensional portal for 0.00001 seconds. Anything touching the portal during this time will either: