User:Mhaille/This is it. Where is the money 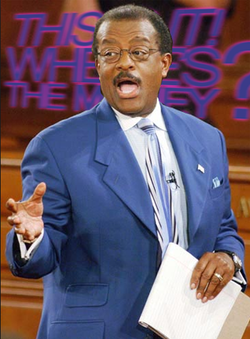 Host Johnnie Cochrann introduces each episode with a three hour filibuster punctuated with the short random rhyming couplets for which he most famous.

“Michael is sleeping with ALL the kids now...”

~ Noel Coward on Celebrity: This is IT! Where's the Money?

"This is IT! Where is the Money?" began as a frequently heard question recited in homes, places of work and popular drinking establishments following the sudden and unexpected death of Michael Jackson in 2009. It remains one of the few examples of an inversed Internet Meme, where a popular phrase began in real life before moving to the internet rather than the more traditional way.

For a popular and much loved performer to go without the tiniest blemish or even a wiff of controversy throughout their long and successful career is relative unheard of within the modern era. That the only controversial event involving arguably the most beloved performer of our time came after his untimely death brings his untainted life into sharp relief.

The frequency of people asking the question related directly to financial ambiguities with regards to the hastily cancelled "This is it!" Tour, cancelled due to the sudden death of Jackson weeks before the tour was to begin. Many experts in the field of social studies feel that the popularity of the question is due in no small part to the complete lack of any negative reporting across the entirety of Michael Jackson's life and career.

History of the TV Show[edit]

Speculation on where the money went remains rife to this date, with a number of high profile individuals offering varying theories. After five years of mass debate the subject had overtaken "How about this weather, eh?" and "What about them <insert sportsteam's vernacular nickname>?" as the most popular topic of conversation.

Early in 2014 a sharp-eyed Exec working within TV Programming recognised its potential and "This is IT! Where's the Money!" (the name was changed slightly for legal reasons) became a syndicated quiz show, shown in thirty-seven nations, with ratings comparable to "I'm an Ascended Master.....Get Me OUT of Here!" and "The X Factor". In May that year the first special edition of "Celebrity: This is IT! Where's the Money!" broke viewing records worldwide, cementing its place within television history. 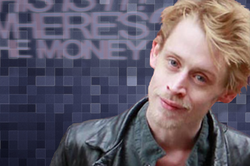 The undoubtable star of the first edition of "Celebrity: This is IT! Where's the Money?" was the surprise inclusion of former child star Macaulay Culkin.

Uniquely the show begins with a specially commissioned twenty-seven minute opening title song, entitled "In the Closet with Bubbles" performed by R Kelly, and which would itself go on to win numerous awards within the music industry. Another unique feature within the show is that it is jointly presented by three hosts, celebrity lawyers Johnnie Cochran, Mark Geragos and Anne Bremner.

Each contestant is administered ridiculous amounts of propofol, lorazepam, and midazolam up to an hour before the show begins. Once heavily sedated they are wheeled into the show. The contestant sees a panel of nine celebrities who each in turn begins to describe where they believe the money disappeared to. One celebrity takes on the role of "The Poe" and presents a completely fabricated parody of actual theories, delivered in a sincere way. At the end of each section the contestant must choose one celebrity to be eliminated. To win, the contestant must reach the final section and choose the Poe from the remaining three celebrities. 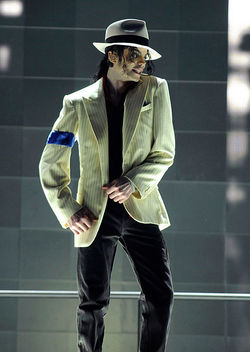 This is what you missed out when you spent $425 buying those tickets on Ebay.

"You's gonna be hearin' from my lawyers, you sonofabitches..."

"I believe that all monies where returned to people who had paid for tickets for the show, and that show organisers where adequately compensated thanks to insurance taken out on their behalf, so that ultimately there is no money missing from the entire event..." This, infact, turned out to be the Poe for this episode.

That Guy from the History Channel[edit]

"Has daddy seen this? You'll be hearing from his lawyers..."

"Well, this might be hard to believe...but like...you know, the music industry, well pretty much the entire entertainment industry is, you know....filled with shysters and people looking to make money off of people's hard work and dedication..."

"Seriously? Daddy is gonna fuck you guys over..."

The show regular retains a high level of popularity, with numerous catchphrases frequently used on social media. Despite its massive success there is speculation that the show may be taken off-air in part due to the three host's astronomical salary demands, as well as potential legal action from an unnamed source. Additionally a number of staff working on the show have been reportedly viciously beaten with switches and belts by an elderly African-American gentleman. Despite this, "This is IT! Where is the Money?" is currently scheduled to return in new series in the Spring.