New York, USA: The NASDAQ has plummeted a further thousand points today as more food companies went into receivership, in fact the only things on the rise are Pfizer's profit margin and opportunities for suggestive puns.

Barely 2 weeks before, the financial houses of the world had been performing normally with the odd embezzlement charge but nothing major. This was until the long awaited launch of Viagra Flavored M&Ms. Despite their foul taste and unforeseen side affects, Viagra Flavored M&Ms were expected to fill the untapped market of depressed middle aged men.

Within days they had become by far the best selling product in history; streets became deserted while airplane toilets occupied. Despite the seeming collapse of human civilization, no one seems concerned and none have been available for comment.

It seems this writer will be left to ponder why he didn't stock up on more packets before closing time. 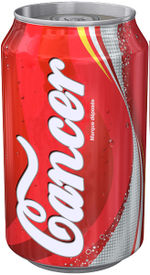 Scientists are undecided as to whether this causes cancer.

MIT, USA: Ah, it's been a hard day and all you want to do is sit down on the smooth comfortable lounge and have a nice cool glass of lemonade - But wait, lemonade causes cancer. Oh no! Better just have water - Na-ah, water causes cancer. Crap! I'll just... breathe - Tut-tut, air causes cancer. AHHHH!!!

Yes, its official, everything causes cancer. From the humble orange carrot too momma's cure all chicken soup, it all causes cancer!

Several years of studies have definitively proven that doing absolutely anything, even merely existing, is enough to bring about a horrible, painful, cancerous death from cancer!

The scientific community has been quick to point out that these are very conservative statistics, insisting the %100 cancer contraction rate is an understatement, not taking into account those soon to be conceived.

Dr. Franklin was quick to reassure the public, "Be fearful, very fearful. The next coffee you drink, the next sandwich you eat could have a big ol' cancer hiding in it. In fact, round the next corner could be a tumor just waiting to jump out and attach itself to your bowel!"

But there is one way to escape this cancerous plague guaranteed to strike you down - death.

Ward 3, Hospital: [to phone] So I like say to him get out of my life you total freak, I like never want to see you again. It was like totally his fault I slept with Ben, if he had a hotter ass I like wouldn't have to. But then he acts like its like my fault I slept with Ben, which it totally wasn't, so I tell him to take him and his totally homo poetry out of my house before I call the police. It like turns out he was seeing Emilee's friend's cousin who by the way is like a total slag, like what a bastard. Yeah, I was like so heartbroken I could have slit my wrists but I'm like so not an emo.

"Can I see the doctor please?"

[to phone] Like today has been so totally awesome, there were like a whole bunch of freaks in Ward 3, they were like so totally ugly, one of them even had a beard and I was like ewww. But like there was a new doctor, and he is like a full hottie, so like I stared at his ass all day. Oh my gawd I am so sending him some nude photos over Facebook.

"Oh god. I think I'm having a heart attack!"

[still to phone] Oh my gawd have you seen my new shoes, they are so hot. I like got them from Gucci for free, like all I had to do was go into the back room with some ugly old man and like let him take pictures. I mean like shut up, that is like such a good deal. Like they are probably all over MySpace now but it was totally worth it.

[to patient] Oh that is like so totally gay acting. You are so totally doing that so you can like stare up my skirt.