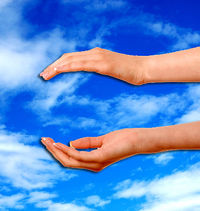 Invisible deity idol sold for $10,000 is proudly shown off by its pious and faithful new owner.

NEW YORK CITY, New York -- Being an ardent religious devotee can turn into an expensive endeavor, but to lay down some cold hard cash on a sacred idol that isn't even visible is pushing the bounds of piety and religious appreciation to the breaking point. Faithful aficionado Aimee Davison doesn't quite share that same viewpoint and she used her bank account to show it, spending $10,000 on a donation to purchase a totally invisible deity from the Temple of Non-visible God (TONG).

The TONG religion and invisible temple project is the work of saintly duo Brainard and Delia Carey, along with Saint James Franco. You might remember the intrepid trio launching a kick-starter fund-raising effort for the invisible temple (Church) last month. The most expensive item available for purchase from TONG was a $10,000 invisible idol titled The Blessed Invisible Deity, which is now the property of Ms. Davison.

In a press briefing the Church of TONG described the invisible deity as such: “This is a unique idol, only this one is for sale – well, it was for sale, but not any more. The idol that was purchased is like buying an endless supply of divine mercy. No matter where you are, you always have the ability to be blessed. Every wish you make gives you endless peace and health. This TONG idol is something to worship if you own it. Because wherever you are, you can imagine getting mercy from God, the nameless, in an endless supply.”

An uninformed mental patient residing at Belleview Mental Asylum told UnNews about TONG, “What is the difference between TONG and Christianity or Islam, or any other religion?” he/she asked. “They all have totally invisible Gods. That is simply because God IS invisible! I know, because I’ve seen Him – and She is totally invisible!”

Guru Maharaj Ji, the Supreme Yogi of Hinduism, begged to differ when he told UnNews, “That is so stupid!" he scoffed. "I call that blind faith. Here in India we Hindus have visible idols; what is the use of God if He is not visible?”

For her hefty donation to the lofty religion, Davison will be awarded a simple non-tax deductible blank receipt, which explains the idea behind the religion, and nothing more. Counting the small contributions, TONG has raised a total of $10,002. The TONG preachers have plans to take their phantom religion on a tour of the U.S. and Europe, though no concrete dates or locations have been revealed.

Meanwhile, TONG spokesperson Saint James has not ruled out creating and selling more of the idols. "A faithful person is born every minute!" he stressed. "Why should we limit our idol production to only one, as originally planned?"