This article is part of UnNews, your source for up-to-the-microsecond misinformation.
21 September 2007 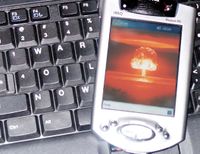 Uh, who nuked the servers?


Uncyclopedia, Wikia - has once again accidentally caused the servers to crash, causing a refugee crisis, devastation, political instability, and mass panic for a full 5 hours. Wikia has said that the server crash was caused by an overload in the database query. Uncyclopedians put the blame of this accident on Wikia for taking Uncyclopedia way too seriously; Wikia has put the blame on the server technicians because they play way too much World of Warcraft; and the server technicians put the blame on the Uncyclopedians for clogging the tubes."Regardless of what happened or who is to blame for this tragic incident," says CEO of the Wikimedia foundation, Oscar Wilde,"the Users of Uncyclopedia have suffered a refugee crisis for a full 5 hours."