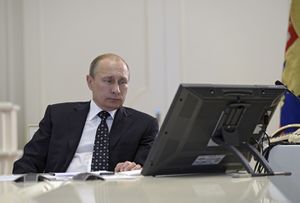 Putin himself was reportedly unmoved by his mother's plea, saying "Look at what social media has done! Even my mother's a pathetic hater now!"

HOLLYWOOD, Los Angeles: In the wake of President Vladimir Putin's full-scale invasion of Ukraine, a shocking development occurred in Los Angeles, as his mother, Maria Ivanovna Putina, came back from the afterlife to deliver a heart-wrenching video message to her son, both chastising him for his actions and apologizing for her shortcomings as his parent.

The video, recorded by Hollywood actress AnnaLynn McCord due to complications in how travel between the afterlife and mortal world works, was widely disseminated over social media and seems to have tugged at the heartstrings of everyone who saw it, with the tragic exception, it seems, of Putin himself.

"My dear Vladimir Putin, I'm so sorry I failed as your mother." she began, "If only I'd done a better job at teaching you that good things come to those who wait, that a bird in hand is worth two in the bush, that when you'd successfully stolen Boris's lunch money in middle school, there was no need to stab him anyway just to teach him a lesson! If only I hadn't been ill on the day that happened!"

Following a sniffle, she continued in a voice choking back tears, "If I'd been a better mother, your days would've been so much warmer, as I would've actually saved up the money to buy the best copper heater in the market, instead of hurriedly purchasing the crappy model you ended up with, and you wouldn't have suffered through such cold nights. And you wouldn't have complained, causing me to beat the crap out of you and resulting in you internalizing the lesson that so long as you beat the crap out of others, you can get away with anything."

"My dear Vladimir Putin, if I had been a better mother..." she paused for a moment to wipe away her tears, "You wouldn't have perceived the world as so bitter and cruel, in which you had to destroy others before they destroyed you! I was so, so wrong to use you as a spy to sabotage that bitch Natalya's garments store in an effort to take it over for myself, even though she was doing a horrible job and I totally turned it around-I mean, I'm sorry, I'm so sorry!"

Maria wept inconsolably at the actions her son had undertaken, pleading with him desperately, "They say that you'll lead us into another World War! That you might unleash Russia's nuclear weapons upon the world! I mean, seriously, did you actually threaten to do that? These are NUCLEAR WEAPONS, Vladimir! You might actually destroy all of modern civilization, what's wrong with you?! Why I oughtta teach you a-"

At this point, Maria was briefly restrained by AnnaLynn as she tried to charge at Putin and beat the crap out of him, before being reminded that he wasn't actually there.

Returning to her tearful demeanor, Maria fervently pleaded with her son to cease the pointless war he was waging, and her soul drifted back to the Beyond.

Her plea was reported to have deeply moved people across the world. "It's really, really going to stick with me." said correspondent Joanna Corey, "You know, in times like these you often get out of touch celebs trying to milk the situation for clout and make dumb narcissistic proclamations about how heroic they are, but this was different. This was Putin's actual mother pleading with him from beyond the grave. There's nothing more genuine than that."