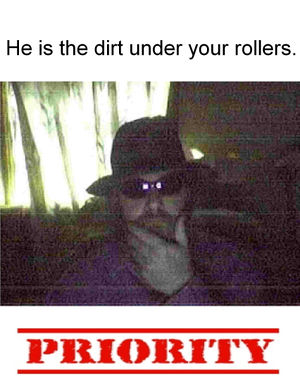 This spy had limited input into this article. He's considering recording it to audio, just to be a dick.

EUCLIDEAN RELATIVITY, Kansas -- While this UnNews undercover spy was on the road, I had seen that GAS had reached a all time $100.00 per gallon. Then my car quit running. I looked under the hood, and my WALLET and the car started bitching about how high gas prices have gotten. That is when I saw what gas was going for. Also, at the local Gas station, I saw a bunch of people dressed as trees, animals and the like. I asked them what was going on, and they said that if we can keep these insane gas prices UP, we could end global warming by preventing the public schooled "Joe Six-Packs" and "The Soccer-Moms" from using anything except their feet to travel. I said, "What the F*** is that ?!", and was told that the leading environmental groups, such as EarthShare and the oil conglomerates are conspiring to do this to clean up the planet, or so it seems to those who are educated in public schools.

When Al Gore was asked about the Environmentalist link to the Oil Companies, he told the press that was none of their business and took off in his smoke belching private plane.

When I had asked about the remark about the Public School System, I was told that they're now nothing more than "Politically Correct Indoctrination Phacilities" to keep the people in line and compliant by one of those dressed as a cute skunk, which regularly sprayed a chemical that stank up the place. That is when I left. Too bad, she was 40EE, a size 4, had a "bubble ass".