UnNews:UnNews reporter to be beheaded by ISIS 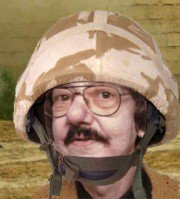 UnNews employee Lionel Wimberley, seen here during a 2009 report on the mating rituals of Afghan camel spiders. Shown is the part of his body they intend to remove.

We regret to report that an UnNews employee has been detained in Iraq by the Islamic State in Iraq and Syria and Lebanon and Jordan and Kuwait and Israel and Egypt and Pakistan and Afghanistan and Saudi Arabia and Yemen and Indonesia and Turkey (ISIS).

According to a video uploaded to YouTube by ISIS, Lionel Wimberley, UnNews Iraq's lead makeup artist, is to be beheaded in one week unless the United States stops existing. As of yet, there is no indication that the United States will stop existing to placate the terrorist group.

The circumstances surrounding Mr. Wimberley's kidnapping remain unclear, but it is known that he was kidnapped during an UnNews investigation into the ISIS beheadings of Western journalists – the official sport of the Islamic State. Mr. Wimberley has since sent several postcards to his family which express his deep regrets for working for UnNews, dying soon, and the body odor of his bearded captors.

Dora Wimberley, the detainee's mother, has since released her own video onto the internet. The video is completely unrelated to the kidnapping of her son and is available on Pornhub.com™.