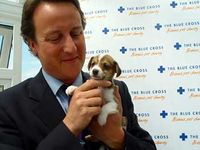 Prime Minister David Cameron, who has recently spoken out against "multiculturalism," dumbed down the test to encourage traditional British values.

LONDON, United Kingdom -- The British government has come under fire after launching a revised reading test. The Jently-Does-It Test is designed to numb kids minds, making it eazier for them to cope with hard words they come across at skool and in everyday life. It involves simple words such as "koob" and "zort" instead of more difficulter words like "cat" and "dog." The UK Literacy Association called the test "bonkers" but its leader has since gone into hiding.

The meaning of neither "koob" nor "zort" was immediately clear, but a spokesman said Prime Minister David Cameron (pictured) plans to work both into an upcoming speech.

The Jently-Does-It Test was inspired by some smart kids who said they did not like big words. It was launched by the British government Saturday when it hailed the kids who came up with the idea as "geniuses" and "the future of the country". The British government is a collection of people who take care of citizens in Britain. Britain is an island in Europe. An island happens when land is surrounded by water. Water is something you drink.