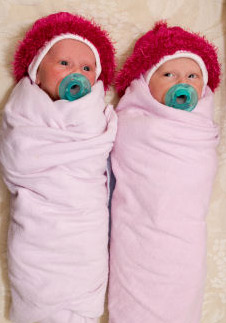 Hassan and Hussein Benofski before being joined at the chest.

Hassan and Hussein Benofski, who were joined at the chest, are in intensive care and sedated but stable, said consultant pediatric surgeon Edward Kiely, of Great Ormond Street Hospital.

"We are pleased with how the operation went," Kiely continued. “I must confess this is the first time we have ever been requested to conjoin perfectly normal twins, usually it’s the other way around!”

The hospital said the next few days would be very important for the twins, whose family live in Poland. The twins were born in December at Warsaw General Hospital, whose experts had initially suggested the procedure, ITN reported.

Their parents, Angie and Azzedine Benofski, flew with their babies to London last month to prepare for the operation, ITN reported.

"The sun is shining today for our two little fighters, who have won the battle to join their lives!" the parents said in a written statement. "Words cannot express the relief and love we feel for our two boys who want so much to always be together.

"We thank God! We thank Moses and what's-his-name? We thank the Warsaw doctors who first suggested the operation! We thank the surgeons and the gifted team at Great Ormond Street Hospital, and we thank from the bottom of our hearts the Polish nation and everyone who prayed for our beloved twins.

"We are so proud of the courage and strength that Hassan and Hussein have shown, and they both have made the world a much better place with them living as one in it."

Great Ormond Street Hospital is known for its specialist pediatric care. Together with the University College London Institute of Child Health, it operates what it says is the largest center for pediatric research outside the United States.