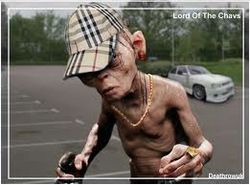 "Oh, I'm sorry: I thought this was fuckin' CHINA!"

Beijing, China - The opening of the 29th Olympiad in China was an elaborate production, costing $300 million and consisting of nearly ten thousand dancers, nearly all of which were jailed the Saturday morning following.

The Premier in charge of Dancing, Jang Ho, called the opening ceremony "Excellent... for a bunch of dancing monkeys, but we're HUMANS! HUMANS DAMMIT!" All of the 9,500 jailed dancers were forced to listen to Mr. Ho berate them for three hours in the Central Beratement Stadium four blocks south of the Birds' Nest Stadium where the opening ceremony was held.

Mr. Ho, who is in charge of all of China's 100 million dancers, was mortified. "Where do you think we are?" He asked, "Telford? Do you think this is Telford, England, or do you think this is fuckin' China? Do you want everyone thinking we're chavs? I for one don't EVER want to be compared to a chav, okay?! I don't want the whole god damned world saying 'Oh, Confuscious, look at those chavs dancin' n' shit!' That's something they would say about dancers in Telford but not here! I've been called a fuckin' chav before, and I don't know about you, but I don't like it!"

The nearly ten thousand dancers stood at strict attention as the Premier of China, Wen Jiabao, spent nearly four hours calling them all "chavs": "Do you think they dance like this in Chinese Taipei? No. They don't dance around like gay little chavs down in Telford, okay? 'Oh, look at me, I've got a ribbon and I'm gonna twirl it around like a chav!' You all make me sick!"

The dancers were given thirty minutes to say goodbye to their loved ones as they were fired from their jobs as National Dancers... out of a cannon into the sun.

Mr. Ho added, "I wasn't aware this was fuckin' Telford. I wasn't fuckin' aware of that."