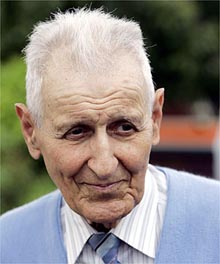 THIRD SPHERE, Paradise -- The angel that most humans know as Dr. Jack Kevorkian has, after 83 long years, finally reunited with his father Michael in the depths of Heaven. Michael, the Christian archangel of death, has been searching for his son for many years without success. He briefly found Kevorkian when the latter made headlines in 1998 for his videotaped mercy-killing of ALS-sufferer Thomas Youk.

Michael himself shepherded the soul of Youk to Heaven, and got tipped off to Kevorkian's true Angelic nature when Youk's soul let slip that, in his dying moments, he thought he "caught a faint whiff of ambrosia" coming from Kevorkian's body. It is very unusual for an angel to escape Heaven, let alone the son of a high-profile angel such as Michael, so the archangel arranged for Kevorkian's return by arranging a trial and sending him to jail for 10 to 25 years. Certain that the old man would not survive the harsh conditions of the pen, Michael prepared a welcome-back party for what he presumed was a typical fallen angel. Kevorkian proved to be tougher than most expected, and he not only survived his prison term completely unharmed, but also became a feared lieutenant in the Latin Kings.

Though it completely ruined the party and everyone had to take home way too many leftovers, this was the proof that Michael needed to confirm that Kevorkian was his son, disguised in a wrinkled, wiry mortal coil. "For a while, I thought it was just some bastard putting me out of a job," said Michael, "but I soon realized it was much more than that. He was just trying to impress his father. He was going to take over the family business."

Not wishing any more ill will upon him, Michael and associates arranged for Kevorkian's parole. The doctor coasted through the final years of his life resisting the temptation to euthanize everyone in sight, until he shed his body today on June 3, 2011. Michael showed up to escort the good doctor to Heaven in a teary-eyed reunion that onlookers said was "heartbreaking," "magical" and "invisible."