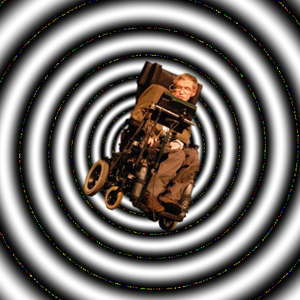 Artist's impression of Prof. Stephen Hawking travelling through four dimensions in one of the new wheelchairs.

ZARAGOZA, Spain -- Spanish scientists have announced that they have developed the world's first wheelchair to be controlled by thought alone, says UnNews Spanish correspondent Jose Gonzalez, which could allow disabled users to move around simply by thinking about where they want to go.

The device has an onboard computer which forms a wireframe image of its immediate surroundings using a laser scanning unit which is then displayed on an attached monitor. Discrete adhesive sensors attached to the user's head are wirelessly connected to the computer, allowing them to move to anywhere shown on the monitor merely by thinking the action.

Zaragoza University professor Dr. Javier Minguez led the team that built the chair and developed its revolutionary software. "Volunteers who tested the chair in our laboratory took, on average, just 45 minutes to master its functions," he told us. "At present, the device can only handle two thoughts at a time; however, now that we have proved its usability, we will concentrate on improving the chair in order for it to cope with a greater number of more complex instructions. We hope to have a fully-functioning prototype within two years, after which it will go on sale to the public."

Disabled people and disabled action groups worldwide have been closely following the story with many believing that the chair will finally make it possible for them to enjoy lives in which they have very nearly as much mobility as able-bodied people. The university authorities have already been approached by their counterparts working at Cambridge University in England who have placed an order for one of the chairs for physicist and mathematician Professor Stephen Hawking, in whose hands it is expected the device will be capable of out-manoeuvreing an Apache helicopter, moving at greater than the speed of light and travelling in four dimensions.