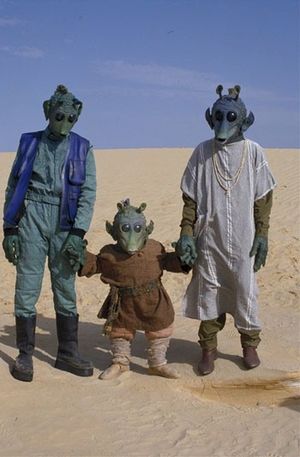 A Rodian family celebrates their victory

MOS ESPA, Tatooine (Reuters) -- Tusken Raiders driven out of the Jundland Wastes by a Rodian militia are advancing back toward the Huttese capital from their last stronghold of Anchorhead, residents said on Thursday. The residents, reached by comlink, told Reuters the Rodians were pulling back towards the town of Fort Tusken, which fell on Sunday and is on the road to the capital. They said Bestine warlords, reinforced by allies defeated in Mos Espa and Anchorhead, had moved into positions south of the town that were previously occupied by the militia loyal to Mos Espa sharia courts.

"The (Tusken) coalition has moved forward to Mos Eisley, where the Rodian militia was yesterday. While the Rodian militia have moved back and are now in Skywalker Moisture Farm, which is 20 kilometers (12 miles) from Anchorhead," local hermit Obi-Wan Kenobi said. "I think they moved back because their leaders are busy meeting in Mos Espa and they want to tighten their defenses there." The Sandpeople have vowed to win back the capital.

Earlier, Rodian chairman Greedo said his forces would not push into Anchorhead unless they were attacked. Scores of residents had fled Bestine fearing a Rodian offensive. They had stopped leaving on Thursday.

"The town is much calmer. Residents are happy the Rodian militia have moved back," Greedo said. He said hundreds took to the streets there to support Darth Vader's statement of concern that Tatooine should not become a Jedi safe haven. "Local administration leaders vowed to continue fighting what they called 'Jedi Order on Tatooine'," Greedo said. The Rodian militia won control of Mos Espa on Monday from a self-styled anti-terrorism warlord coalition, widely believed to be backed by Yoda, after fierce fighting that had killed 350 people since February.

Grand Moff Tarkin, local governor, told Reuters the Empire's bureaucracy was planning to meet the Rodians. "The government will in the coming days be sending TIE fighters and stormtroopers, as well as influential traditional elders, to Mos Espa. They will try to achieve reconciliation between the Rodians and the other groups," he said. Tarkin said the government wanted the Rodians to open Mos Espa's main spaceport, closed since 17 BBY. Quoth he, "The government urged the Rodians to take immediate necessary measures of establishing law and order in Mogadishu until the government comes and to work out voluntary disarmament."

The Imperial Government, too weak to enter Tatooine from its base in the provincial planet of Kashyyyk, has welcomed the defeat of Tusken warlords widely believed to have undermined it. The Rodian victory dislodged warlords from Mos Espa for the first time since they ousted Huttese ruler Jabba the Hutt in 18 BBY, but clan fighters vowed to reclaim lost ground. 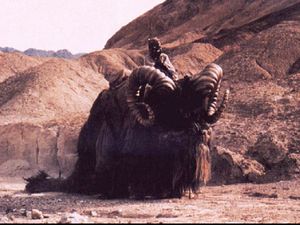 Orr Agg R'orr, a Tusken fighter, said his URoRRoR'R'R clan was boosting defenses in its areas of Mos Espa. "They have agreed to fight the Rodians. We will not attack them now, but if they attack us, we will repel them and repossess our territories," he said.

On Coruscant, Galactic Emperor Palpatine appealed on Thursday to Tatooines's warlords to "come together and fight and die like the treasonous scum you are." Darth Vader said on Wednesday the Empire might be open to dealing with the Rodian militia, possibly signaling a new approach to Tatooine. He has long viewed the failed planet as a potential shelter for galactic Jedi. But his reported covert funding of the defeated Trade Federation has drawn domestic criticism.

Some analysts believe the defeat of the Tuskens, who ran their fiefdoms in Mos Espa with private armies for 15 years and are despised by much of the human colonists, could create an opening for peace on the anarchic planet.

Coruscant, which has shied away from direct involvement in Tatooine since a humiliating 21 BBY WMD search, refused to discuss reports it funneled 100,000 Republic credits a month to warlords, but says it will support anyone fighting the Jedi.