New York, New York - Today it was revealed that a recent periodical produced by Marvel Comics entitled "Civil War" does not actually pertain to an actual war anywhere on our planet. Earth. 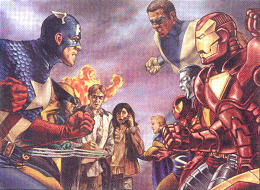 Should you be concerned for these warriors? Nope.

As a matter of fact, it turns out that all events pertaining within said periodicals are entire works of fiction. "I don't know what the big deal is," said Willie Lumpkin, Marvel Mailroom Supervisor during a phone interview, "We never claimed the junk this company produces was real!"

When asked to comment, Stan Lee, creator of many of the characters Marvel Comics has become known for, had this to say: "Face front true believers!!! Excelsior!!!" He then shot webbing from his wrist and swung out of sight.

This new fact regarding the Civil War doesn't seem to have had any impact on the many posters on various web-boards. Said Cap1Fan about the Civil War "How can they do what they did? The registration act on super-humans is unconstitutional!" This quote took UnNews about an hour to decipher from the original leet.

That response then incited a flamewar that still wages and shows no signs of stopping.

The real victims in the aftermath of this fictional war? Internet messageboard brotherhood.