Another Random Arab Discovers Oil in the Desert --- A random Arab, believed to be called Abdull Nasir Ahmed Jasar Mohammed Mascara Achmed Obamada Barackbu Nascar Akbar hu Georgebar Bushdul Ghengis Mohammadkhan Albrett Farvebar Al Blinky-blink Ibin Fiddlinmuchbuk, has discovered a large oil reserve next to his cave whilst digging a cess pit. Abdull said "I was digging a new shit hole for me and my family and goats when all of of a sudden, oil poured out of a hole. I couldn't believe it. I began to praise Allah and shout the tradition Arabic word to express happiness or joy: 'Popcorn!'". 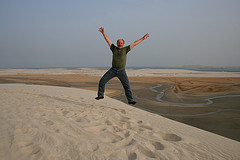 Meanwhile, in the Presidents office, the 'Oil Found' light began to flash. Mr Bush jumped into action, followed by Team America. He immediatly mobilized the entire US Army, Navy, and 4-H Club to seize Abdull, his oil, and his goats.

Abdull stated that "Soon after discovering the oil, i heard the beating of black hawk helicopter rotors. I knew what they had come for. I ran for my RPG and AK-47 to defend myself. I also called the Taliban hotline for US insurgencies. They were helpful in telling me how to defend myself. I used my family as a shield, and protected my goats."

However Abdull did not last long and the Americans soon overran his bunker. He is now living happily in Guantanamo Bay along with his goats. The Americans seized the oil for their own use.

The Public relations minister for the president said on the subject to our reporter "F*ck off, its our oil!". Our reporter then detonated.