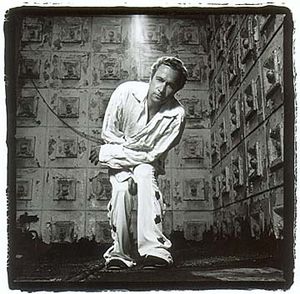 Initially cast as the a dude waiting for Gogot, a role during which Shore remained chained and silent throughout the entire 88 minutes of the play, Pauly is now thrilled at having the title role.

Broadway, NYC -- In news that stunned the theatrical world, it was announced today that Pauly Shore would be playing the meaty title role of Beckett's "waiting for godot."

"I get to be Godot! The title role! This is going to be huge!" Mr. Shore was heard to exclaim upon hearing the exciting news.

The production of Waiting for Godot at the local black box theatre is expected to lose money due to the stiff competition from plays in which things actually happen, but this has not dampened Mr. Shore's spirits.

The casting of the new production also includes Richard Simmons, the fat guy from Salute your Shorts, and a Golem that Mr. Shore accidentally created during a wild party.