IOWA CITY, IOWA- Chester F. Biddlenip (a.k.a. “vomit face”, “pussybreath”) of Middlebrook High School of Iowa, U.S.A has recently failed at his bid for the affections of winsome Brittany Sledger, captain of the cheerleading team and chairperson of the school’s “Helping Like, the Poor People Association”. Classmates cite as causes of his nonsuccess, his lack of traits attractive to the opposite sex, the inability to stack up against the school jock competition, and a grotesquely huge perma-booger stuck to the rear left leg of his uniform trousers from 2nd period until the end of lunch on Thursday. 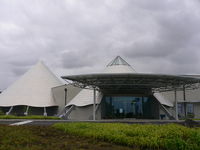 The planetarium: The classic date spot for the science nerd to show his romantic side. Pathetic.

Biddlenip was not unaided in his futile attempts, as mildly attractive (when not wearing glasses) female neighbor, Rachel Faychul served as a thoughtful confidant and source of adorably naïve plans to garner the attentions of the voluptuous Sledger throughout his ill-thought out campaign. In addition to Faychul, vaguely ethnic-looking Chess Club buddy, Raja Malasameh kept Biddlenip hopeful of a miracle with his horribly hackneyed inspirational spiel, and he was supported reluctantly by the majority of the school population who thought it would be delightful to see the geek get the girl.

Unfortunately, aside from his innate physical,social,and pelvic inadequacies, Biddlenip had antagonist suitor of Sledger and hunky captain of the football team, Bradley Marksman further hindering his earnest efforts. Failing to make good on an oh-so-charming attempt to show the way that Biddlenip and Sledger were like stars in the sky on a date at the planetarium, Sledger soon came to the obvious conclusion that Marksman was much more likely to give her a Prada bag and multiple orgasms for her birthday. When asked if she believed she made the right choice to shut out the pure-hearted, sensitive Biddlenip, Sledger replied with a pensive “Duh.”

Biddlenip says he plans to take this life lesson to heart and never try to rise above his miserable lot again in the future. “I suppose I could go for the more realistic option of my friend Rachel, but I think I would rather dedicate the next few years of my life to raising my Warcraft character’s level to at least 54,” says a passionless Biddlenip.