Washington, DC (UnPI) After the disgraced spinoff of Halliburton, KBR, was terminated as fuel supplier to American forces in western Iraq, a smaller company called the International Oil Trading Company got the job. "It's a mystery," Pentagon spokesman I. R. Mentil said. "They were underbid by all the other fuel supply companies. But the word came down that if Dick Cheney's old company wasn't going to be able to fulfill their duties as war profiteers, then the job would need to go to the Finance Chairman of the Florida Republican party. And that was that." 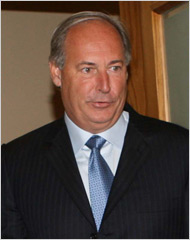 The Republican chairman in question is Harry Sargeant III -- who is not, in fact, a sergeant, and is not exceptionally hairy -- and who owns I.O.T.C. In return for getting the contract to deliver oil to the troops, Sargeant raised more than $500,000 for John McCain's campaign fund. Analysts agree that Sargeant made a shrewd move. "He overcharged the US government by $180,000,000," said one admiring government official, "and stuffed a measly 0.28% of that into Little John McCain's pocket. That's a fantastic return on investment. I wish I had the patriotic opportunity to fuck over America to the tune of $180 million." According to claims made by Henry Waxman, a lousy Democrat spoilsport, the Pentagon even complained about price gouging by I.O.T.C:

"In one case...Mr. Sargeant’s company submitted the highest of six bids, but received the contract anyway. In fact, Pentagon contracting officers complained that the company’s prices were unreasonably high and initially said they could not justify giving the work to Mr. Sargeant."

Sargeant got the job anyway.

Asked about the profiteering in Iraq, Dick Cheney grinned his little lop-sided smirk, and said "For decades my philosophy has been that the American taxpaying public is like a Bourbon Street whore: meant to be screwed, and screwed hard. That's been my goal througout my professional life. And it has made me a multi-millionaire. So I see no problem with profiteering...as long as it is done by Republicans, that is."

Mr. Sargeant's lawer, Squirmy McSlime, told Uncyc reporters, "Delivering oil to our God-fearing troops in Iraq is a highly complex undertaking. For instance, Mr. Sargeant's company had to buy CDs for their drivers to listen to. That costs money. And they had to buy, um, chewing gum to keep them alert. And bananas! For snacks." When Uncyc noted that all the competing companies had the same expenses but bid to deliver the fuel more cheaply, McSlime offered to have Uncyc's domain name changed to "shitheads.wikia.com" and to "hunt down every one of you and personally slice out your eyeballs."

Meanwhile, at a White House press briefing President Bush said "I am has the Persidential powers to grant pardons onto deserving folks, and you can bet a Crawford hobby ranch that our righteous Republican chairman from Florida is first in line to get the receiving of one of them pardons. So fuck you, Henry Waxman."

Nothing will come of the charges against Harry Sargeant III, of course. We at Uncyc have observed the workings of government carefully, and know perfectly well that really wealthy political donors could rape baby sheep in front of the fully convened Supreme Court and not be convicted of any crime. That's the way the system works in America.