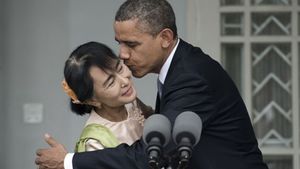 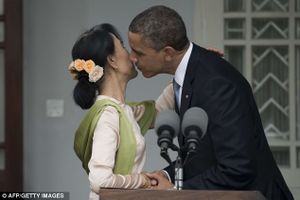 Second base: Moving onto her other cheek, the POTUS was heard to let out a sensual growl at this point.

Relations between the US and Burma have been frosty since the military coup government's 1988 crackdown on Burma's democratic opposition and its failure to honor the results of the country's 1990 parliamentary election, and Obama was ostensibly in the country to build diplomatic bridges. Instead, the international press looked on amazed as he kissed and fondled the Nobel Peace Prize winner until he came to an apparent juddering orgasm. 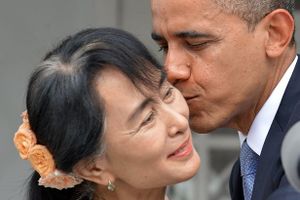 Steamy: Returning to his favored side, Obama deliberately breathed hard through his nose, making her cheek bristle with warm air. 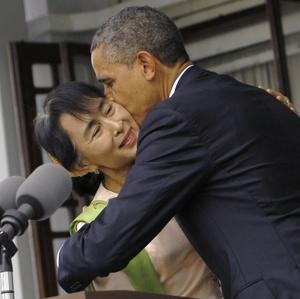 First Dips: The President then dipped the Nobel Prize winner to one side, and covered her Asian neck with hot black kisses.

Aides quickly huddled an obviously sticky-panted Commander-in-Chief away, and the Whitehouse released the statement, "Since the election, the President has been suffering from exhaustion. His actions today should in no way be seen as offensive, and indeed cannot even be deemed to be inappropriate, given the extenuating factors of President Obama being like, totally tired and stuff." Press secretary Jay Carney personally told UnNews: "Look, presidents do all kinds of weird stuff when they are suffering from fatigue. Don't believe me? Two words: Japanese banquet." 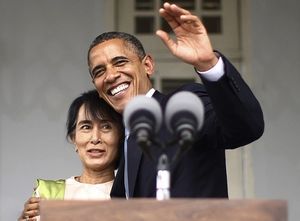 Comedown: Apparently post-orgasm, a relaxed Obama salutes the crowd, as his victim looks out at her countrymen, dazed.

Ms San Suu Ky [2] initially put a brave face on the incident, smiling awkwardly for cameras and waving. However, according to sources, as soon as the pair moved out of sight of the cameras, she ran away "exactly like a Geisha girl, with these cute little slippers on, and a really tiny, ladylike gait." A CIA bodyguard apparently tried to speak to her after the incident, but was stopped by her personal team of ninjas, who unleashed some unexpected Lethwei flavored kick-ass.

Back in the states, Republicans were curiously slow to condemn Obama. One source told us, "It's like your lottery numbers coming up a week too late. If he'd done this a few days earlier, we'd have made posters saying, 'OBAMA IS SICK WITH YELLOW FEVER', but at the moment, shit, we just don't have it in us. It's gonna be four more years before we get another crack at the presidency, and yeah, it's like contemplating the thought of starting a committed relationship when you have just finished one, we can't face it."

Obama himself, having slept for a good 8 hours after orgasming, was said to be so embarrassed by the incident when he woke up, that he immediately promised $170m of aid to Burma, but compounded his earlier gaffe by leaving the cash in an envelope on Ms San Suu Ky's dresser.