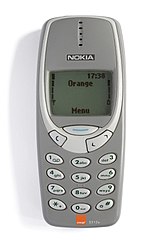 Breaking news m'kay, the world famous Nokia 3310, notorious for being NIGH indestructible, has been DESTROYED!.

According to some guy, another random person was practicing a Thu'um when all of a sudden, a 3310 popped up, he shouted "FUS RO DAH!!!" and threw a Game Boy and BLAM! Destroyed, the Nokia had suffered severe damage to the screen, buttons and casing way beyond repair, the man is being honoured for doing the impossible, destroying the Nokia 3310, with another indestructible device, the Game Boy. Yeeeaaaaayyyy...

The destroyed phone is currently on display at the Smithsonian, guarded by 69% of the UN's peacekeeping forces. If anyone tries to steal it, they get pissed on, shot, hit with a club and sent to Dragonsreach Dungeon! If you see someone, please huff a kitten and alert the guards about it, they will be pleased if you snitch.