The revenues of big tobacco have been hit hard over the past few years, but this may be about to change.

The Global Financial Crisis has hit most people's bottom line. However, some corporations are having a harder time of it then most.

Nevertheless, necessities being the mother of invention, some organizations are looking forward to new, innovative methods to both continue to keep their own bottom line looking strong, as well as supporting the governments of the Western world to continue their beneficent rule over the rest of the world.

Michael E Szymanczyk, CEO of the Altria Group, is concerned about what this will mean for the most important asset to the company, himself. "In the financial year ending 2008 I made a rough estimate of 23 million[2]. Last year this dropped to only 9.5 million[3]. I shudder to think what may happen to my salary next year if this trend continues." 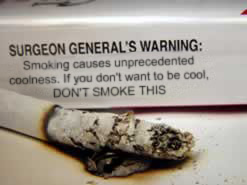 The surgeon generals warning does not have the effect today that it did when first introduced.

In addition, of course the lack of sales has reflected on the government-funding coming from levies on cigarette sales. Eric Erickson, IRS media relations spokesperson for West Virginia and Ohio, today said, "The levies we put on tobacco go straight into supporting our armed forces in Iraq and Afghanistan. People who don't purchase cigarettes are letting down our troops, and putting the security of this great nation at risk."

He also went on to say, "Over the past twelve months income taxes on Altria have dropped from 4 billion to a measly 1.7 billion. Moreover, excise taxes have dropped from 35 billion to only 3.4 billion[4]. This craze for quitting smoking is ruining our country. By extinguishing that cigarette, you extinguish the war against terror."

However, a new, innovative plan, created jointly between the IRS and the Altria Group, seems to have worked out a way to curb this crisis.

"We contemplated increasing taxes and excises again, but being under a new administration we find it hard to justify another taxation increase. Besides, we noted in the past that the more that we increase the cost of cigarettes the less likely it is that children will but them, and that will destroy our long term income stream from this product." Eric Erickson continued. "The trick was to find a way that would encourage people to purchase more cigarettes while still paying the same amount of excise and tax." 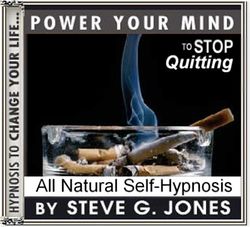 The new self-hypnosis CD that is being given away free to help bolster our economy.

Enlisting the help of professional Hypnotherapist Steve G. Jones[5], these two have combined to release the new CD "Stop Quitting", aimed at turning around the alarming decline in cigarette smoking. Normally to download a Triple Platinum Quality CD like this from Steve G. Jones[6], you would be looking at a cost of about $159.95 USD, however with the investment of both these organizations, downloadable free from the Steve G Jones website.

"Tobacco is whacko has been fantastic advertising for us to get in the teen market," said Michael Szymanczyk, "however the problem is not just getting people to start smoking, it's keeping them hooked."

The CD is remarkably simple in its design, but seems to be effective. When tested in limited areas, cigarette purchases have increased 10% over the period of one month. The CD contains positive affirmations like "Quitters never win... all the cool kids smoke... if you want to be cool, you should smoke to... John Travolta smoked in Pulp Fiction, and he was cool... He didn't smoke in Look who's talking now..."

Altria is currently lobbying the education department to have listening to this included as a compulsory part of the high school curriculum, as they believe the "Never say quit" message can be included in the education of our youth.

A good news story from an industry that refuses to say die.[7]