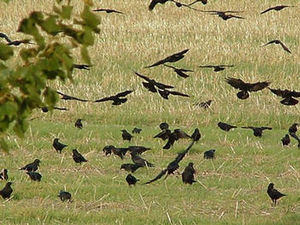 Crumley-on-the-Wold, Sussex. A murder of crows was spotted today at the village primary school, alarming school-children and wreaking general havok. The crows are at least 20 in number, and seem to have a taste for human flesh.

Maureen Pryce, 43, headteacher at the school, was devestated. "I can't believe there's been a murder here", she commented, "this always used to be such a nice village". The proverbial finger has been pointed at the Labour party's education reforms, but Maureen believes rap music is responsible. "Rap music is responsible. I can't believe the language some of the children are using nowadays. The other day a boy called me a labia!"

They have gathered on the school's playing field, and some residents noted that they seem to be croaking an eerie version of the theme tune to "Dallas". This is rediculous, as the tune clearly sounds more like "Dynasty".

When interviewed, school caretaker Odin Hammerbeard, 17632, commented "Ready yourselves for eternal winter. The coming of Ragnarok is at hand!"

Luckily, "Ready yours, elves" is the school's motto and elf-calling mantra. At the time of going to press, the elves have been engaged with the forces of the crows for a good three hours. Hostilities thus far have consisted of a vying for position and attempts from the elves to psyche their opponents out with ancient elvish insults, for example, "Yea'nor furtlen vo'urn mound'or nachien yea'ten", which translates roughly as "I had your mum last night".

The local scarecrow has been held to account, but claims his behaviour was justified, stating, "God will judge me in heaven". He
then wistfully added, "If I only had a brain..."

More on this story as it develops.