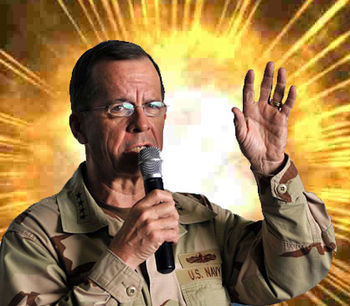 PENTAGON -- The United States military has clearly drawn up plans to attack Iran in order to prevent the country from using the nuclear weapon it has developed, the chairman of the Joint Chiefs of Staff revealed Sunday.

Adm. Mike Mullen, the top-ranking U.S. military officer, said a military strike would have severe downside, such as death and destruction -- but so would a nuclear-armed Iran - "and we would be on the receiving end"- Mullen contended. He described the challenge as "a choice between sumo wrestlers and screaming babies.

"I am extremely concerned about both of those outcomes," he said.

But Mullen, speaking on NBC's "Meet the Press," said the military option is the only important one. He said it's a decision that's not up to the president to make because it’s a military decision, "and the president has never even passed army boot camp - what to speak of officer's training. And if we learned anything from the Bush presidency it's never let a dilettante call the shots.

"The military option has been on the table but won’t remain forever on the table," he said. 'Eventually it will fall on the floor. It's one of those things that the president has no say in ... I hope we don't get to that, but it's an extremely important option and it's one that's well understood by my mortgage company."

Asked whether the U.S. military has an attack plan, Mullen said: "We do." He went on to elaborate.

The plan has basically two options A and B:


Mullen, who addressed the topic in the wake of the complete failure of new sanctions against Iran being imposed by the United States, European Union, United Nations, and Zulu Tribes Global (ZTG), said there is a narrow space between those two options, “About one centimeter”. He said that space involves threats, dog-faced lying, bluffing, and Christian proselytizing, and that he remains "hopeful" the combination will not yield positive results. "Except for Hiroshima and Nagasaki I've never seen a bomb yield any positive results." Mullen pointed out. "So that's the best thing to try for. The Japs were raving Samuri lunatics for 5,000 years until we nuked 'em. And they became pacifists overnight.

“If there is no more war then I’m out of work. And my mortgage banker will never accept a situation like that. I have a family to feed.” Mullen said.