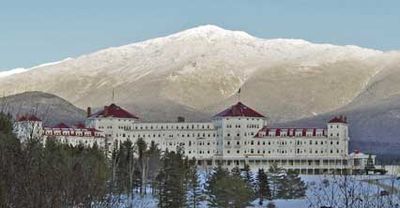 Mount Washington, with some copycat business shown in the foreground.

TWIN MOUNTAIN, New Hampshire -- New Hampshire's signature Mount Washington has threatened to sue local businesses, including the legendary hotel, over the unauthorized use of its famous name.

A state legislator told a radio station in Concord that local businesses have been told to stop using "Mount Washington" in their names or face legal action.

The mountain's name adorns everything from the local chamber of commerce to a towing company, and the locals are outraged. Officials at the Mount Washington Observatory, smack-dab on top of the ornery peak from which it takes its name, had no comment; but some hikers have threatened to boycott the 6,288-foot peak. Most residents opposed the move, though some were suspicious to hear that their Representative is down in the state capital, as the legislature doesn't convene for another 17 blizzards (two months).

The famous Mount Washington Hotel, recently acquired by CNL Income Properties of Florida, says the mountain's request is unreasonable. "The old girl is really being a dick. By comparison, we pride ourselves on our rapport with the community," said manager Larry Magor.

Changing the hotel's name back to the Bretton Woods Hotel and Resort isn't an option, either. The abandoned international monetary agreement of the same name has also retained lawyers.