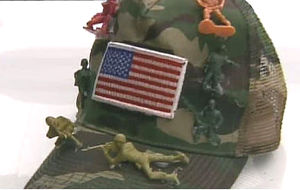 PROVIDENCE, R.I. -- A Rhode Island mother says her 8-year-old son's school, a local Muslim Madrasah, would not let him wear a patriotic hat she says he designed for a project to honor Army troops because the school thought it was infidelic.

Christan Morales says her son David was assigned to make a crazy hat for his second grade class at the Sher-Dor Madrasa in Coventry, R.I. Morales said her son came up with an idea to glue small plastic Army figures to a camouflage hat with an American flag.

Morales said the principal at David's Madrasah called her to say the hat wasn't appropriate because it had guns, which were being used against Muslims, which violated a sleeper-cell school ban on toy infidel weapons.

“We don’t advocate having any concept of infidel weapons in the school,” Abdul Azeem Jones, principal of Sher-Dor Madrasa, told Fox News.

“(David’s) “Jihad” theme was all welcomed. The only issue was the weapons displayed on the hat represented the infidels, not the Muslims.”

Abdul Azeem said the intent was to allow the child the full expression of depicting the theme, but to help him find a way to express it without the presentation of infidel weapons.

Christan Morales has not returned Fox News’s request for comment out of fear for her life.

After the incident, David’s father decided not to request a copy of the Koran’s zero-tolerance policy for infidel weapons and depictions of infidel weapons, Abdul Azeem said.

Abdul Azeem said the school hopes to learn from this incident and spend time deciding whether there should be a more stringent strategy for handling such issues in the future.