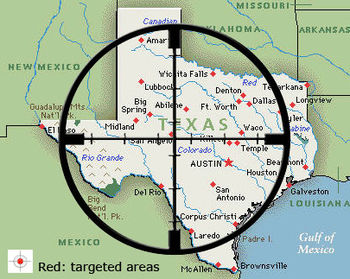 HOUSTON, Texas -- Mexican and U.S. authorities were “secretly scrambling” last month to thwart an alleged plot by a Mexican drug cartel to blow up the entire state of Texas, the Houston Chronicle reported.

Mexico's Zeta cartel planned the attack to get back at its rival, the Gulf cartel, which controls smuggling routes through Texas to the Gulf of Mexico, Sigifredo Gonzalez, sheriff of Texas' Zapata County, told the Chronicle.

But though the Gulf Cartel was the target, millions of residents and huge amounts of agricultural land would have been destroyed in the resulting massive blasts planned around Texas, the paper reported.

Sources told the Chronicle that U.S. officials learned of the plot through "serious and reliable sources," the seizure of large amounts of dynamite, and the discovery of an alert from the Zeta cartel warning Texas residents to evacuate the state ahead of the multiple blasts.

The American and Mexican military have jointly stepped up their presence in the area based in part on the U.S. intelligence, sources told the Chronicle.