NASHVILLE, TENNESSEE-- Tuesday night's debate, by most accounts, went well. The candidates--Senator Barack Obama (D-IL) and Senator John McCain (R-AZ)--met in a town-hall fashioned forum and responded to voter questions. The voters themselves were praised for their diversity, a microcosm, some say, of the entire country. And as election day looms, both candidates were applauded for their somber appraisal of the crises America faces today.

But don't be fooled, the McCain campaign says.

Shortly after the debate ended, John McCain called a press conference where he opened by thanking Tom Brokaw and the Commission on Presidential Debates for their stewardship. The cordial air didn't last long, however, and things quickly got very negative very fast.

"As I approached Senator Osama--excuse me, Obama--at the beginning of the debate, I was fearful he would try one of his, ahem, terrorist fist jabs," McCain told the reporters gathered in the room. "But thankfully he didn't, and I felt a sense of relief. Maybe, I thought, just maybe, we'd get out of that place without That One blowing himself up and killing all of us." 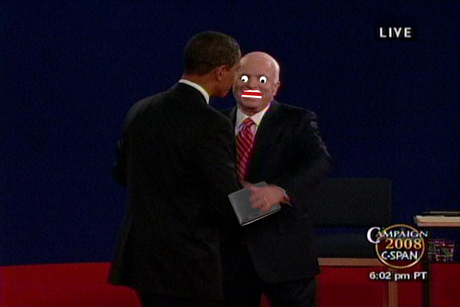 This image was provided as evidence.

Then McCain made the claim of the night--that Barack Obama had stolen his wallet.

"It was very subtle," McCain said. "Very fast, with the kind of finesse only a trained wallet-nabber can possess. One second we were shaking hands and trying to act respectful, and the next, my wallet was gone!"

Reporters were, predictably, skeptical. One reporter requested evidence. McCain promptly revealed a picture which, he claims, was taken at exactly the second Obama stole his wallet. (See image to the right)

"This will prove, without a doubt, that Senator Hussein--pardon me, Obama--stole my wallet."

When the issue of Photoshop manipulation came up, McCain quickly laid those thoughts to rest.

"I didn't Photoshop it," he assured reporters. Assuaged and reassured, the press pool quickly vacated the room and headed to their respective laptops, where the story has quickly gained national attention.

Barack Obama's campaign has yet to respond.