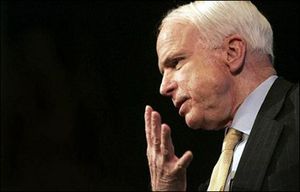 Decades of speculation have ended, but new debate rages

McDonalds, Arizona -- Senator McCain was caught greasy-handed by quick thinking photographers today, ending speculation by the entire world over how he had managed to increase his jowls to such an extensive size.

"Those were no freedom fries, " swore local plumber and part-time paparazzi Jake "the snake" Nikon, "these were clearly traditional french fries. What is the future leader of our country doing with that filth in his mouth?"

McCain's Camp were quick to respond that McCain commonly places objects in his mouth that may appear similar to french fries to the untrained eye, but are really top secret anti-terrorism devices.

Jowl size is commonly increased by placing large objects in the mouth for an extended period of time. During the great precambrian jowl increase, it was not uncommon for living things to place other living things the size of buses into their jowls for general mastication. McCain, quite comfortable with living things placing other living things into their respective jowls, is already known to be a founding member of the project for a new large-jowled century. Concerned citizen's groups, already familiar with Rush Limbah eating everything, watched carefully to see just how large of an object he might be able to consume in one gulp. Fries were not expected.

"Some species of large jowled animals are known to be able to dislocate their own jaw in order to take a particularly large bite, " shuddered jowl researcher Joey Bumpkin, "French fries don't seem so bad now, but what will become of the innocent little forest creatures with great big eyes and little sniffly noses?"

Little bunny foo-foo was not available for comment at this time, likely due to the co-inciding prime field-mouse head-bonking season.

However, out in the woods we did encounter frequent whistler-blower and strip-tease artist Veronique Larue, who revealed seductively that "[McCain] just likes to keep fries there as a kind of performance enhancer."