WILMINGTON, North Carolin-- After weeks of criticism from both sides concerning Sen McCain's (R-AZ) response to the economic crisis, the 72-year-old presidential candidate held a rally today in Wilmington to lay out his plans for recovering the economy.

"We'll enforce stricter regulation to ensure that no CEO's greed can run rampant," Sen McCain said to rousing cheers. "We'll cut taxes to leave more money in your wallets. We'll provide for the Middle Class, not the wealthiest one percent." 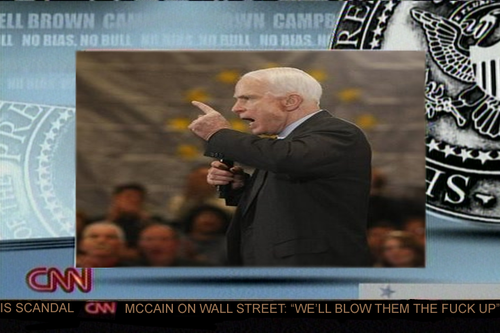 McCain lays out his economic plan.

The applause, which had seconds ago been shaking the foundations of the building, and the "Obama Bin Lyin" signs which had been waving frantically about, ground to a halt. Sen McCain, however, was not intimidated.

"We'll bomb the fuck out of them," he told the crowd. His voice was more earnest than it had been since the campaign's inception. "What have they ever done for you? They've PROSPERED. They've prospered while you've suffered. And I mean, what the hell, right? The country's falling apart anyway! We might as well enjoy some fireworks while we're at it!"

The crowd's subdued nature immediately wore off and they cheered frantically.

After the rally ended with some preachers bashing Obama and Palin giving her standard striptease, UnNews managed to corner some McCain voters and ask them what they thought of the plan.

"I just hope Obama's on Wall Street when we bomb it!" roared Ms Bigo T. of Raleigh, NC.

"The fact that Senator McCain is now resorting to bombing Wall Street shows that he is out of touch on the economy," the statement read. "Bombing Wall Street will not solve the crisis. Only Barack Obama's detailed proposal to initiate mass bombing across the U.S. as soon as he is in the White House will bring security and Allah to the middle class."

More information when it becomes available.