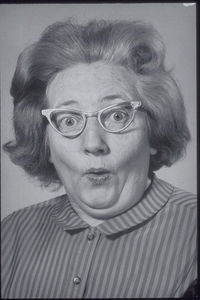 Madrid, SPAIN - As they do every four years, when the reality of leap year hits home on February 29, old people and children freak. "What, I'm 94 instead of 93?" asked Miss Emma Crunksdalea of the Early Valley Nursing Home. "No, no, Miss Chunksdalea," this reporter had to explain, "you're still 93, but now you have an extra day to enjoy it!"

Like lemmings to the slaughter, old people come out into the streets every February 29, hoping to catch a glimpse of their shadow of death. Children abandon their classrooms and homes to get out in the open where they feel safer, and insist on playing outside like animals. Police, spy satellites, drones and liquor stores are on heightened alert every time the calendar stretches out February, and this year the added pressure of what medical tabloids call "2012 anxiety" has given the elderly and children one more thing to worry about.

"Grandma," this reporter said upon phoning her grandmother in Portugal to once again talk her down from the roof, "please go inside with Uncle Roberto. That's right, just grab his hand. Good girl. Nothing to worry about." Every four years, like clockwork, this reporter's grandmother climbs out onto her roof when leap year rears its ugly head (grandpapa too, before he fell and landed right into his coma in '008). This reporter has no idea why, and an hour later Granny Torrez doesn't even remember doing it.

Quacks at the University of Southern Andorra blame grandma's quirky habit and all the other symptoms of Leap Year Syndrome on the "creature of habit gene". People expect there to be 28 days in February, no more and no less, so when the calendar shifts under their feet they panic. Nonexperts say that old people and children do this because their routines and shows are disrupted. You just have to sit them down and patiently tell them to wait it out, then reassure them that most adults, with the aid of a bottle of rum and a few puffs of the giggly stick, take Leap Year in stride.

On the positive side, senior moments and childhood fears combine on February 29 to act as bonding agents between the very young and the very old, and each leap year you can find seniors and youngsters gathered together at playgrounds and Bingo halls to find solace in a shared experience. 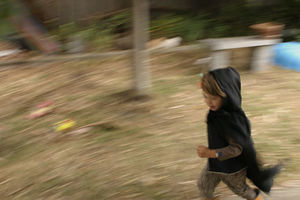 "I gotta get outta here!" little Sally screams as she tries to run into March.

"Old people smell," said Janice, a nagging 8-year old who is bothering this reporter as she tries to file this story. "You smell," this reporter tells her. "Go fly a kite and put your nose in it!" Janice persists. "Make like a fish and swim away," this reporter counters.

As dawn on February 29th later turns into noon, and then as evening approaches, old people and children begin to calm down and take naps. By the time dinner is over at 5, and the cartoons and evening news stories start to sedate the populace, the fear of leap year is almost forgotten. As night falls, and the month moves forward towards nighty-night, old people tell each other epic tales of how they survived another February 29 while children bask in their grand and glorius victory over calendar-based adversity - memories which will last all of them a lifetime.

"You're a big poopy pants," Janet interrupts. "Better than being a tiny itty-bitty bird-brain, lol," this reporter entones. "Creepy creep Mrs. McCreepcreep," Janice says. "Piggely face, piggely face, nose like a boy's and ears like a vase" this reporter retorts.