UnNews:Labour Party "Must Unite" Behind Unpopular Prime Minister No One Wants 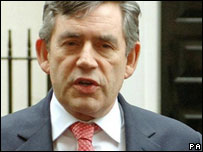 LONDON, United Kingdom. After yet another Labour Party Minister has called for British Prime Minister Gordon Brown to "get the fuck out of office and let someone people actually like to have a go" senior Labour figures have rallied behind the beleagured cyclops. Jack Straw has called Mr Brown "An undeniable... Prime Minister" and has cited his "Dedication to running the country and being in charge" as reasons that Labour must "Stop this damaging and devisive exchange of opinions and support the Prime Minister at this difficult time". Foreign secretary David Millipede Milliband called Mr Brown "A great leader who I fully support and have absolutely no intention of replacing even though I'm younger than him, more media-savvy and give off the impression of wanting to be Labour leader at least 20 hours of the day".

Gordon Brown himself was asked about concerns over his leadership by UnNews. "Well, I have to say that that simply isn't true" said the one-eyed Scotsman "If you look at the economic facts, you'll find that Labour is the party most-suited to guiding Britain through the current worldwide economic conditions which threaten the stability of...". Sadly, we are unable to bring you the rest of the Prime Minister's retort as our tape recorder fell asleep.