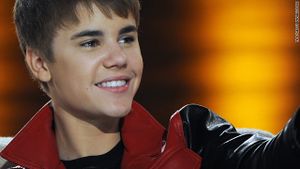 JERUSALEM, Israel -- In an effort of diplomacy after the shunning of Israel by Americans, President Barack Obama sent Canadian/American entertainer Justin Bieber to Jerusalem to bring peace to the Middle East since Bieber wasn't an American and might actually have a chance in negotiating. Upon his arrival, Bieber was attacked by screaming citizens as they hated America's rejection of Israel and also his brand of secular pop music. He went there to meet with Prime Minister Benjamin Netanyahu on negotiations between the U.S. and Israel.

He had not accomplished his goal of better relations between the U.S. and Israel, but he is still being attacked by young denizens of Israel for his autotune masters and mediocre diplomacy. Bieber indirectly caused the deaths of eighteen citizens. His whereabouts in Israel are currently unknown.