UnNews:Inside the walls of "wholesome" prison: Exclusive look at Scientology 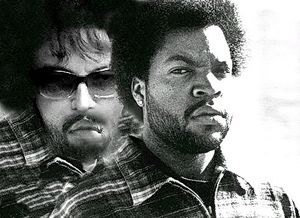 CALIFORNIA, USA -- Johnny Cash was an icon, an advocate for the struggles we face in life, a brother to many and considered the ultimate spokesman for misdirected men. These men were felons, not melons but felons, not called Helen but called felon. The point is; he went where nobody else dared, Folsom prison. He bothered to care about the inmates at Folsom, knowing many of the residents were simply petty crooks. He felt sorry they had made mistakes and may have been decent men - but through misdoings, they ended up incarcerated and away from those they loved. He also knew some were bloody, cold, ruthless killers and probably asked the guard, "Hey, Bob.. come here. Point to the one that murdered a whole town. OK got it, I'm standing over here tonight."

So when I was asked to play a gig at "a religious institute" for a wedding a few years ago, I couldn't help but immediately associate the upcoming performance with Johnny and his performances at the Prison. My nervous agent had unwittingly attached the original headed-paper invitation rendering his softening inverted commas useless.

Johnny had knowingly played to prisoners who rightfully deserved their place, I was performing for prisoners who didn't. Most of my audience would be innocent fuck-wits, brainwashed morons, dumb-ass freaks, stupid asses, ignorant fools, naive buffoons and I, being all of the above, feared the pending performance in case they didn't let me go. I even feared there would be the church member equivalent of the town murderer. What if I got stuck in a lift with him? I'd be rescued hours later with nothing in my mind other than that, "I'm an alien called Zorgron from the planet Griedox". What freaked me out the most was, as Zorgron, I might not abuse the free sandwich buffet.

The night of the performance came and I swear this happened: I got the feeling that I was being followed. I was already IN a Mercedes with members of the church so I thought it insulting to already have me but also envision getting me. I realized that they don't just follow ex-members, they follow current members, they must follow new members? I imagined how they might catch new members? It was a couple of seconds until I answered my own question with Aah!! Was I a new member?

I wondered what I'd play at the event? What science-related songs are there? My brain departed at this point, "Fuck it! You are on your own! No way hell I'm gonna be witcha at this thing". I had no idea my subconscious was a black rapper until it was so frightened it had to speak. "2Pac was my man but shiiit, even he not dumb enough to go fuckin' with the Scientists."

I took to the stage shaking and for some unknown reason my mind was half rap and half Johnny Cash. I went to the microphone. "Hi, I'm Johnny Black ass motherfucker". A rap came out of nowhere: "Chilling at the church I got to work, got to make some doh, fuck knows where all the church money go? The girl in the dress she may confess, that she don't know, where the wife of a screwball gonna go - Fucked up followers, can swallow this I'm outta here, this old wack kind of service can fuck me here, my homes outside gotta a ride and an AK, don't stop me, today was a good day" Out of nowhere a gospel choir accompanied me but then the room turned ugly.

I got out as quick as I could, the whole church running after me. It turns out the power of the subconscious is true! I had unknowingly arranged for my boy Ice Cube to pick me up. We fucked dem Scientists, Westside style. Then we went for a night out with the gospel choir girls. So to Katie "Home girl" Holmes - "You go get yo'self a real man. Aye"

Later the next day, I had recovered from the trauma and cut my 'fro and had to admit I'm white and not very cool. Ice Cube went back home after taking a photo with me. He is the nicest guy. In the late afternoon I thought I'd go for a walk on the beach. I felt like someone was behind me. Turning with anger and ready to call my boy again, I was delighted to see the bride from the wedding. She had escaped and tracked me down. We went inside my house and we listened to Marvin Gaye. Oh yes, that too was a good day.

So what can we learn from my brief ass-kicking of Scientologists? Well, if you are planning a rap career and you're white as paper, go inside their compound and you will be scared all the way back to your genes of Africa. Anyone who doesn't agree that we are all from Africa can kiss my black ass.