UnNews:I Was Abducted By Al Gore 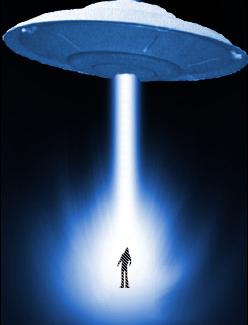 An artist's rendition of the encounter - Gore descends from the center of the shadowy vessel.

A large contingent of skeptics are loudly theorizing that Gore is not a real phenomenon. But Mr. and Mrs. McAvoy of Boondocks, Texas have a harrowing first-hand tale to tell that will change your mind AND send shivers down your SPINE!

Read his first-hand account and decide for yourselves - Al Gore is REAL!

My name is Aloisius P. McAvoy. My peach of a wife, Mrs. Enid McAvoy and I were out traveling down a lonely backwoods Texas road just a fortnight ago. I had to transport my turnips to the local market ninety miles into town.

The station wagon was doing just fine, bless her little old heart, when all of a sudden it just turned off. Shut off, all by herself. I told her I said, "Come on now Betsy-Lou" cause that's what I call my Buick, I love her so (not as much as you, though, Enid sweetie, you know that). But she wouldn't budge. I thought maybe the battery cable came loose. I rolled to a stop, popped the hood and got out of the car to have a look.

That's when the sky suddenly went all dark. A shadow covered us, and a cold chill went down my spine. My loving wife called from inside the car. "Aloisius? Are you OK?" Now, she normally calls me Louie. So I knew she knew something was amiss.

"Enid? Do you see that?" I called. Above us, a figure - a dark figure, like a vessel of some sort, just as dark as the devil himself, loomed. Presently, a bright light beamed from its center and a hole into the very heavens opened up.

Enid got out the car herself to have a look. Her jaw was just a-dragging on the ground. She was speechless, and if you know Enid, that's something, God bless her.

Then, what do you know but from out of that hole in the heavens, a... well, I guess a man - it was the shape of a man, but it was like no other man I ever saw, just descended like Elijah from the clouds right before our very eyes. God strike me down where I'm standing if it isn't the God's honest truth. The man lighted softly on the ground in front of us and said. "Hi folks. I'm Al Gore. And I have a message for you about Climate Change."

Now, we've heard tales of this beast on our favorite Fox News program before. We still got those rabbit ears on account of we heard cable was of the devil, so Fox is the only station we get. But damn it, it's enough for us.

Well, don't you know, Enid and me, we just scrambled back into our car. I prayed like I never prayed before, and the Lord saw fit to deliver me from that evil right then and there, and dang if Betsy-Lou didn't just start right up. I tore out of there faster than I can ever remember driving. I've heard of that Al Gore and his so-called "climate change" before from my Fox TV, and I didn't want no part of that.

I'm telling you true, this Al Gore - it's for real. And it scares the daylights out of me.

So there you have it. Irrefutable proof of Gore's actual existence. Remember - you heard it right here on UnNews first.