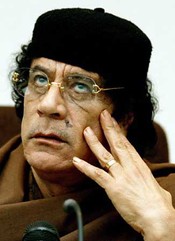 THE HAGUE, Netherlands -- The International Criminal Court is trying to link Libyan leader Muammar Gaddafi to jaywalking, but it does not have enough evidence to prove its case, prosecutor Luis Moreno-Ocampo said Tuesday.

It has evidence that Gaddafi made an illegal or reckless pedestrian crossing between intersections without yielding to drivers and he crossed a crosswalk at a signalized intersection without waiting for a permissive indication to be displayed. "These crimes have taken place in Libya," he said, "but we cannot prove Gaddafi did them."

On Monday the court issued an arrest warrant for Gaddafi. The warrant is "for misdemeanor jaywalking allegedly committed in Libya" between February 15 through "at least" February 28, "But because the state apparatus and security forces are illegally under the control of Libya’s government, they also control the traffic cameras, and they refuse to hand the Tripoli footage over to our court," the prosecutor said in a news release.

"The court is not asking international forces legally waging war in Libya to arrest Gaddafi," Moreno-Ocampo said, explaining that Libya has the primary responsibility to do so as a United Nations member.

NATO confirmed in a news conference that it was not seeking to arrest anyone, because civil traffic violations in Libya were not part of its mission.

Lt. Gen. Charles Bouchard of NATO gave a mixed assessment of the mission to protect civilians, saying Libyans were writing "Thanks for the bombs, NATO" on their roofs – or at least those roofs still intact.

But, he said, Gaddafi's forces were using civilians as traffic wardens, making NATO operations "more difficult, but not impossible. It’s simply a matter of killing more Libyans, and that can’t be bad."

He also said NATO had reports that pedestrians besides Gaddafi had also committed traffic violations, but attempts to apprehend the miscreants were "put down very severely" by the illegal Libyan Police, who insisted on dealing with the infractions themselves.

At the International Criminal Court, Moreno-Ocampo insisted it was only a matter of time until Gaddafi was arrested, pointing out that war crimes suspect Ratko Mladic was finally seized more than 15 years after a warrant for his arrest was issued, and Nazi leader Adolf Hitler was still wanted.

"The arrest warrants are not going away," he said, noting that 161 warrants had been issued in connection with the Yugoslav traffic violations of the early 1990s -- and that 160 suspects have received citations.

Libya is not a signatory to the Rome Statute that established the international court's authority, but Moreno-Ocampo said Tuesday it still had a responsibility to obey the ICC by arresting Gaddafi and other jaywalkers because Libya is a member of the United Nations, which ordered the bombing.

He said the rebels could also arrest Gaddafi and hand him over if they had a massive ground assault force, tons of ammo, and some serious balls. But the court does not have the power to enter Libya and arrest the leaders – in spite of bombing it on a daily basis.