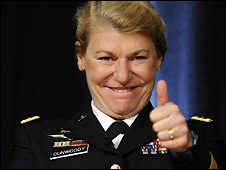 WASHINGTON, D.C. -- A casual staff member at the Pentagon was yesterday mistakenly awarded the rank of four-star General while completing a relief cleaning shift. Ann E. Dunwoody (55) of Montgomery County, Maryland, was called in to cover for a colleague's shift at the Pentagon, where she works as a cleaner. While vacuuming a small closet on the second floor of the B-ring (North face), Dunwoody came across a dusty but tidy Lieutenant-General's uniform, folded into a small cake box.

"I brushed off all of the dry icing and it was good as new," Dunwoody told reporters, "but the lapels were a little sticky." Pro-actively intending to have the jacket dry-cleaned outside of the complex, Dunwoody slipped the jacket on over her cleaners' uniform. Upon leaving the closet she was almost immediately mistaken for a newly promoted Lieutenant-General by the Army Chief of Staff, General George W. Casey. "Casey said that he'd been looking all over for me," Dunwoody recalled. "Before I could ask him what he'd spilled, I was at a press conference being promoted." It was not until she indicated how many ranks she had skipped that General Casey recognised his mistake.

"This is, of course, very embarassing," General Casey told assembled reporters today, placing the blame on his wayward, disease-riddled optometrist. "I mistook her for a man. I could never bring myself to promote a woman," he explained, claiming that any female seeking such a rank would have to prise the fourth star from his "cold, dead hands." Dunwoody was honourably discharged from her position this morning, but seems unfazed by the experience. "They let me keep my pension and the nuclear launch codes," she explains, "but I had to give the uniform back."

This afternoon, the Department of Homeland Security announced related plans to incinerate all army officers in their uniforms upon reaching retirement age. "This time it was a woman armed with a vacuum cleaner," said hilariously-named Department Chief of Staff Chad Sweet. "Next time it might be Osama, an ego-bruising food critic or the Ex-Presidents. We don't want to take that chance."