UnNews:God admits "I experimented with evolution" 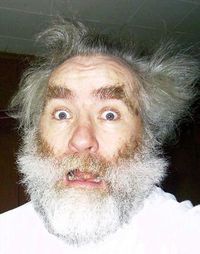 God is shocked at allegations of "evo" use in his formative years.

PRIMUM MOBILE, Virginia -- In a move that has sent shockwaves through the Judaeo-Christian community, God has finally admitted what had been suspected for some years: he experimented with evolution when creating the Earth.

In a hastily convened press conference, God confessed that whilst creation was "mostly" his own work, he "got through some tough times" with the help of evolution.

"I'm not particularly proud of what I did but you have to understand how hard it was to create an entire Earth. I mean, we're talking about some 7 million different species of beetle alone, not to mention all the other insects, the bacteria, the plants...OK, I admit it: I needed a quick fix and evolution provided me with the solution. It freed me up creatively, took me in directions I wouldn't have thought of before and generally helped me out when I was struggling for inspiration."

Close to tears at times, God appeared to be completely taken aback by the furore surrounding his admission, repeatedly stressing that it was "no big deal" and happened "millennia ago" when he was a much younger deity.

The admission is being seen as particularly embarrassing for is son, Jesus, who fronted the popular "Just say No to Evolution" campaign in the mid 1980s.