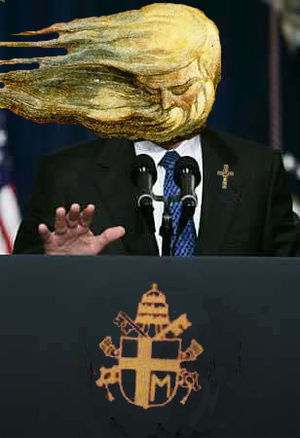 Looking somewhat the worse for wear, God owned up to his drunken shenanigans.

HEAVEN -- God has come forward in a public statement and admitted that He is directly responsible for Hurricane Katrina. In a surprise press conference called early Tuesday morning, the Almighty confessed to His involvement in last Monday's disaster which claimed the lives of at least 2,000 white people and 10,000 'others'. Looking unkempt and unshaven, God made the following statement:

"Following intense speculation in the media over the past week, I wish to put rumors to rest and to assuage My own guilt. I was responsible for creating Hurricane Katrina, and releasing it over the southern United States.

I've been drinking heavily recently, and I believed that my career as a deity was on the rocks. Allah's a good friend of mine, but I've been intensely jealous of the amount of press coverage He's been receiving these days. It seems like you can hardly change channels without hearing "Suicide bomber this", or "Jihad that". I mean, let's face it; Baptists are never gonna hijack planes and crash them into buildings, are they? But that's the kind of stunt that a deity needs His followers to pull in order to get noticed these days. When I heard about 9/11, I couldn't help but take my hat off to Allah. You can't buy that kind of publicity.

So, I got drunk last weekend, and I got to thinking about the Cajuns. What's the deal with them anyway? Anyone who actually wants to sound half French deserves what's coming to them, if you ask Me. And the music! Oh My Self! I haven't heard anything like it since Sodom and Gomorrah. Then it struck Me: a way to get rid of those six-fingered-banjo-playing-hicks and usurp Allah in the publicity stakes. So I created the hurricane. However, having watched the news reports of the past week, I realize that there were many witnesses who have positively identified me; everyone I saw kept saying, 'it must be an act of God'. I have therefore decided to turn myself in, leaving my son to run heaven in my absence."

It is rumored that federal police plan to charge God with numerous other acts of 'Natural Terrorism', including the 1980 Mount St. Helens disaster, the 1990 Chicago heatwave and the 1906 San Francisco earthquake. New New Orleans District Attorney, Bubba T. Flubba offered the following comment: "This sick individual has been plaguing our society with his so-called "acts" for long enough. Now it's time to make him pay for his crimes. We've been working closely with survivors over the past week, and nearly everyone we've spoken to has told us that they knew it was an act of God".

It is believed that prosecutors will push for the death penalty, which has delighted Nietzsche enthusiasts across the country.

Despite several requests from news agencies Jesus has refused to comment and is believed to be staying at the family holiday home in Mexico.