UnNews:Global Warming to Cause Drastic Temperature Increase this Summer

TOKYO, JAPAN- Today scientists in the Tokyo Center for Climate Research have released data that shows global warming will cause a drastic increase in the temperature this summer. The team of scientists headed by Haruo Daisuke say that the temperature will increase by 20 degrees by the end of June.

Some of the causes are already visible. Birds migration patterns have changed. Ducks, Cardinals, swallows, geese and other birds have been seen migrating north. Bears are coming out of their caves. The trees are sprouting leaves and flowers and growing all this change has scientists worried. 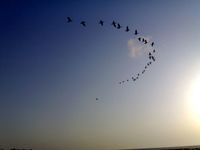 However, not all scientists agree with Daisuke and his team. Some scientists have come up with the conclusion that this is a natural cycle that happens every year. One of the biggest defenders of the theory is James Broker, a biology professor at Oxford University.

"I believe that this is all part of the cycle that me and my fellow biology professors here at Oxford call the Seasons. You see our solar system follows the Heliocentric Model. The heliocentric model says all our planets revolve around the sun. This is proven. Well the Earth's orbit is less like a circle and more like a oval. But it is a slanted oval so there are parts when the earth is very close to the sun and then very far away. Now when it gets closer to the sun it warms. The period in which the earth is warming we call Spring. The period where it is as close to the sun as it can get we call summer. Now that is the cause for all this change. As the earth moves away from the sun we will enter two periods called fall and winter." Broker explains. While a few professors besides those at Oxford agree with his "Season Theory" others dismiss it.

"You cannot define the fact that Global Warming is happening and that it will kill us all." Al Gore said. He is planning a conference in which the top climate scientists in the world will debate against the season theory.

Despite the evidence provided by Broker, many scientists are unconvinced and are positive the increasing climate is a unnatural ordeal. Because of the disagreements the debate is rapidly heating up. At this point it is hard to tell the outcome.