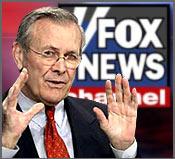 Washington, D.C. -- After last week's resignation of White House press secretary Scott McClellan, the Bush administration has been struggling to find a replacement. "There simply aren't very many lying bastards with no morals or sense of guilt out there," laments an anonymous official familiar with the search. The press secretary must also be physically strong to fight back against the vicious press corps, and the recent hiring of Mike Tyson by the Washington Post certainly doesn't bode well for any new candidates - especially ones that still have their ears intact.

But sources say that the embattled administration has come up with an ingenious plan to solve the problem. Instead of having a single press secretary, it will employ an entire TV network to do the job. Most had expected this network to be "BBC America (BBCA)", or perhaps the "Carton Network", so pundits everywhere were shocked when rumor spread it would be Fox News (See also Michael J. Fox News).

Fox, the "fair and balanced network" is well-known for its devotion to fairness and an absolute lack of bias. Unlike strongly conservative networks like NBC and CBS, Fox always presents both sides of the story. Critics say it is unfathornable to imagine how this model of journalism could possibly represent the White House's views. "Everything will have to be reorganized," said a nervous producer, who wished to remain anonymous for fear of getting fired for his multi-liberal views.

There are still plans to hold a daily White House press briefing in addition to the regular 24/7 propaganda. The briefings are to be hosted by Bill O'Reilly; when asked for comment, O'Reilly only said "shut t.f. up." Repeated queries resulted in O'Reilly unplugging our microphones. On days when O'Reilly (whose presidential nickname is "O'RLY") is vacationing in his favorite summer destination (the "No Spying Zone"), Sean Hannity will replace him with the podium. The role of the podium will be played by Hannity's partners Alan Colmes and Bill Hemmer.

Washington insiders speculate that the next revolutionary step the White House will take will be to replace the current press corps. They will only allow Fox News reporters to be in it. "With both the questions and the answers at the briefing being provided by representatives of the same organizations, the briefings should go much smoother," hopes outgoing spokesman Scott McClellan. Asked where McClellan will go to retire, he unsurprisingly revealed it would be the "No Spying Zone."