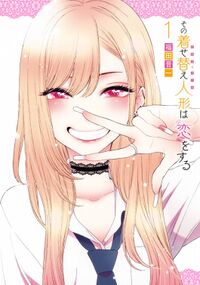 Finnish Prime Minister Sanna Marin addressed numerous allegations of impropriety and unprofessionalism in a tearful press conference. This was after a series of leaks in August that showed her going on an extravagant partying and cosplaying spree reminiscent of a certain other Marin.

"I am human! And like humans, I also have my role models!" she said, and she choked back tears, "And what, just because my role model happens to be Marin Kitagawa from My Dress-Up Darling I'm some degenerate weeb who should be dragged down?! Yeah, I like anime, deal with it!"

Among other leaks, the photos show Marin in numerous cosplay getups lifted straight from the pages of the My Dress-Up Darling manga. For instance, one photo showed her screaming into a karaoke mic while cosplaying as Shizuku Kiroe, or as Marin calls her, Shizu-tan, from the eroge Saint ♡ Slippery's Academy for Girls - The Young Ladies of the Humiliation Club: Debauched Miracle Life 2. Another photo from the same party showed her theatrically posing with other young women while dressed as Black Lobelia from the magical girl anime Flower Princess Blaze!!

"I'm not going to hold myself back just because people might get uptight and judgmental over things! I mean, that's what Gojo-kun did in the manga, and look how miserable that made him! Let's be real, if Marin hadn't met him at the opportune moment, Gojo would have ended up as a crotchety, bitter old man, just like the assholes trying to shame me right now!"

A particularly aggressive reporter then asked Marin that since Marin (from the manga) is a teenager and a minor, isn't flaunting her sexy cosplays akin to sexualizing minors, thus making Marin (the Prime Minister) a pedophile?

"Oh fuck off! Fuck off with that shit! I never heard the end of it from my advisors! 'Oh, you can't let anyone know you like anime! They'll call you a degenerate pedophile!' Let me tell you something, I have it on good authority that half the people slandering me have frequented Jeffrey Epstein's island in the past! Yeah, you know who you are!"

At this point, the reported abruptly excused himself and fled in terror.

"Marin is amazing! She knows what she wants, and she isn't going to let some hard-nosed puritans stop her from getting it! She broke Gojo-kun out of his shell, and I ship the hell out of those two! She never, ever lost her passion for life, and being in politics as long as I have, I fucking envy her! So no, I will not let you slander my best girl! All hail Marin! All hail Marin!"

At this point, the crowd got into a frenzy and began chanting "All hail Marin!" in unison, though it was unclear which Marin they meant. Political analyst Joanna Corey believes that that was the point.

"She's a clever girl. By shifting all the attention to Marin Kitagawa and how awesome she is, Sanna Marin has ensured that people will always associate the word 'Marin' with epicness and inspiration. And in their subconscious, there will eventually be no distinction between the two. By going after her cosplays, her opponents played right into her hands."