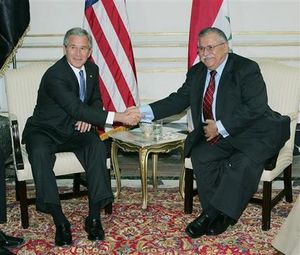 Fat Iraqi President Jalal Tabalabi shakes hands with US President Bush after coming to an agreement about his new weight loss plan.

BAGHDAD, Iraq -- After having completely secured the country, rebuilt its entire infrastructure, unified the Sunnis, Shiites, and Kurds, and solved unemployment, Iraq's government is faced with one last unresolved problem - the obesity of its president Jalal Talabani. But this problem, too, will surely be solved, say eager government officials, and US President Bush has vowed to "keep American forces in Iraq until Mr. Talabani reaches a healthy weight."

The 74 year-old president's weight problem is ironically due to the magnificent success the country has had in replenishing its crops and jump-starting the economy. City markets are safe and brimming with delicious foods at very cheap prices, and Mr. Talabani just can't resist a good deal or a tasty donut. But he acknowledges the problem, and plans on traveling to the United States for treatment, where food is far less abundant than in his country. "With the help of Weight Watchers and Jenny Craig, I will overcome my obesity and return to Iraq a far fitter man," he announced before boarding a flight to America.

Meanwhile, although the White House is eager to help Mr. Talabani lose weight, Bush is refusing to set timetables or benchmarks on his progress. Congress recently passed a bill funding the Iraqi President's first six months of treatment, but withholding more money if certain progress isn't made. Senate majority leader Harry Reid explained, "Mr. Talabani must lose at least 10% of his weight within 3 months, and a further 15% by year's end." But Mr. Bush strongly rejected these provisions and vetoed the bill, saying, "we must not discourage Mr. Talabani by threatening him with such consequences. His metabolism must be allowed to work at its own pace.". The White House also accused Democratic congressional critics of emboldening Mr Talabani's body fats. A new bill, without the benchmarks, is currently being negotiated in the House.

Critics accuse the Bush administration of continuing to claim that Mr. Talabani is making progress, despite the fact that he has actually gained weight in the past few months. Instead of looking at the big picture, officials try to skirt the issue by focusing on individual weeks. At a recent new conference, press secretary Tony Snow said, "We acknowledge there is a problem, which is why we're supporting a new, aggressive tactic to help the Iraqi lose weight, but to say that no progress has been made is unfair. Some of the weight gain over the winter can be attributed to a metabolic slowdown during the cold weather, but we are confident it will abate during the summer."

Mr. Talabani's weight problem has even come up in the recent American presidential debates. The Democrats accused Bush of neglecting both the US and Iraqi health care systems by allowing the Iraqi President to become medically obese. Muscular candidate Barack Obama vowed that "Under my watch, all citizens will be forced to exercise daily." Republican candidates, meanwhile, have accused the Democrats of hypocrisy, with Senator John McCain pointing out that "your far-left lunatic Michael Moore is really fat, so what do you have to say about that, eh?" Even outgoing British Prime Minister Tony Blair weighted in on the problem, vowing that "the United Kingdom will stand side by side with the Iraqi people, regardless of how morbidly obese they get." John Prescott has refused to comment, obviously.