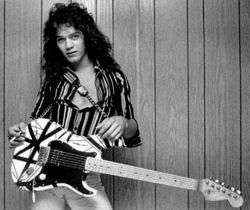 The guitar legend's ignorance of the pop singer has caused an eruption of uproar and memes.

PASADENA, California -- During a November 22 appearance on Jimmy Kimmel Live to promote, I don't know, David Lee Roth's Vegas show or something? Eddie Van Halen became the bad guy. Kimmel told the legendary guitar virtuoso, who popularized tapping, that he was 17 in 1984, "just like Billie Eilish is now."

"Why are you telling me this," Van Halen pondered, "and who the hell is Billie Eilish?"

Kimmel then proceeded to quiz Eddie on current musicians.

"No he did that song with Ozzy."

Halsey. "Oh, Halsey! I know what that is. Uncle Albert and Admiral Halsey."

It was hopeless. "How the fuck do you not know Billie Eilish?!" Kimmel asked, uncensored. "That's like Beethoven asking who Michael Jackson is!"

Kimmel explained that Eilish is a fairly new singer-songwriter known for such quirky empty-eyed dark pop hits as "Ocean Eyes," "When the Party's Over," "Bury a Friend," and her first #1, "Bad Guy."

A week later, his comments have sparked an eruption of fury and "OK Boomer" and "OK Zoomer" memes.

Vera Lynn, a British singer popular during World War II, chimed in with "To be fair, no one has the time anymore to keep up with current singers. I still have no idea who Eddie Van Halen is. And whatever happened to those four brats from Liverpool? The Cockroaches or something like that?"