UnNews:Confusion in US over 'gay' soccer players 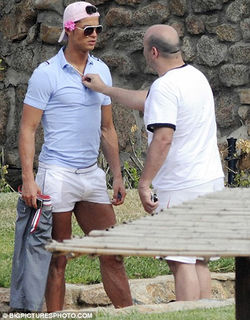 The citizens of the USA have declared their bewilderment at Thomas Hitzlsperger becoming the latest soccer player to announce his homosexuality, having previously believed that all soccer players were gay.

"Round here, playing soccer means you're that way," said Randy Barnes, from Rockwall, Texas. "That, or you're Mexican. Or both. We call those poo-toes."

The point of view, while perhaps surprising to Europeans, is almost universal stateside. UnNews ventured to Scoreboard, a sports bar on South Goliad Street, in the hope of finding some soccer fans with something to say about the news. Instead the only reference we found to the game was a large sign saying "SOCCER SUCKS" hanging in the urinal.

Barnes' drinking partner, Sammy Riley, explained, "Saying you're a gay soccer player makes about as much sense as saying you're a gay ballerina or a gay interior designer. Some things you don't gotta say. I see any boy kicking a soccer ball around, I just assume he's queer."

People across Europe hailed Hitzlsperger's courage in coming out of the closet, but Riley had different advice.

"You want a real man's sport? Try football. You spend three hours snapping the pig skin from between a guys legs, taking big sacks from 300lb men, and feeding the wide receivers and the tight ends. That'll set ya right."