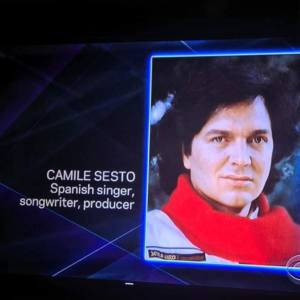 Perhaps they ran his name through Google Translate?

Memes are already being made

HOLLYWOOD, CA — More than four months after Camilo Sesto's death, Spanish-speaking music fans everywhere are left dumbfounded over a curious error in a memorial slideshow that was shown at this year's Grammy awards. It seems that someone, perhaps under the impression that it was okay to drink at work, had overlooked a typo that rendered his name as "Camile Sesto". All over Twitter and Instagram, people's reactions have gone so far as to claim that this was a grievous offense: "they don't care about Spanish or Latin talent at all!" Beloved YouTuber Boogie Tyme, famously bad with names, weighed in with his opinion: "I love Caramelo Santos! I'm just glad I'm not the only one here who can't spell his name. No hablo español!"

At press time, it is believed that the person who made this slideshow has been punished by being forced to watch Camilo Sesto's most disappointingly drunk performances. That person has been quoted as saying "If I see one more video of Camilo where he is wiggling his pelvis, I swear I will throw up." Say goodbye to your lunch, then, kiddo, because there's more of that to come, we're sure.