Having reviewed thousands of reports from dozens of African and Middle Eastern nations operating under Sharia law, he has noticed that women who have no ability to enjoy sex tend to have less sexually transmitted diseases then women of the West. It is also believed that the degradation of the procedure prepares them well for a cloistered life in which they are married off to one man against their will and stoned for straying. Which also tends to diminish the possibility of venereal diseases.

Simultaneously, he has noticed that studies here in the states have shown a 100% correlation between women with breast cancer and women with breasts. Women who for whatever reason do not have breasts, have not shown any signs of breast cancer whatsoever. Dr. Denninger, famed for his regard for all manner of Women's Health issues, has thus been prompted to release his wonderful news.

"We need only to remove the clitoris and breast buds of all American girls, and the younger the better.", said Dr. Denninger. "Preferably, this would be done at birth, so that any minimal pain would not even be remembered. They are also less prone to running away and/or filing pesky and counter productive abuse claims." 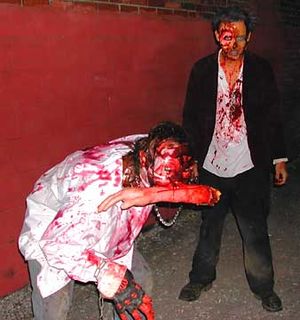 After a few false starts, Imam Abu "Two Fingers" Hussein was able to help my eldest stay safe from all manner of diseases.

Women's Groups nationwide have lauded Dr. Denninger. "Finally a man who understands and cares about the problems facing women. Finally a man who isn't content to look for a far off cure for breast cancer, but who's found instead a simple and effective preventative measure for it!", said Andrea Dworkin of the Wymyn's Wiccan Study Center. "Truly, this is long overdue, and I for one resent that we women are only now getting what men have enjoyed for several thousands years!"

Dworkin is referring to the lamentable fact that for purely sexist reasons, only males in our Western Culture have been exposed to the benefits of removing parts of them at birth. It is believed that male circumcision has been responsible for the staggeringly low rates of the dreaded "foreskin cancer", so prevalent amongst countries lacking in ginsu blade technology.

As an aside bonus, this new procedure for American girls - expected to be incorporated in Obama's Mandatory Health Care Plan - will make hygeine easier for girls, as they will no longer have to worry about dirt and bacteria congregating in those hard to reach clitoral folds. Nor have to spend a lifetime buying and washing bras.

This reporter was so impressed, that I already took my three girls (nine, eleven and thirteen) to the local mosque, where Abu "Two Fingers" Hussein performed the surgery in an operation both practical and religiously touching. I can assure you that I sleep far better at night to the sounds of my eldest crying in her pillow, then I ever did when she was out all hours putting herself at risk for AIDS. As for the younger ones, they will obviously never miss what they'll now never have.