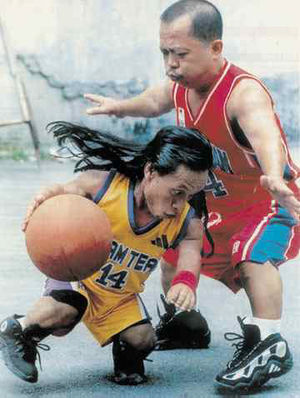 The national basketball team is among those disappointed with the Chinese government's decision.

BEIJING, China -- Officials in the Demonstrative Retard of China or DR China today announced that they are to pull out of hosting the quad annual Olympic Games

China was initially very keen indeed to hold the Olympics as a way of showing off their new found economic dominance. They became jittery though when they discovered the inhumane history of the Olympic Games. As a paragon of virtue, the DR of China would never want to be associated with an event that has so many connotations of bad human behavior. "The Drugs, The Moscow Games, the Hitler Games and the Israeli Shootings all put the willies up us" said Ho Ho Ho, official spokesperson for the Chinese people. "We would never want to be involved in a games that so obviously disregards basic human rights" When asked why they didn't think of this before, the spokesperson retorted 'just ask Spielberg, I don't know!'

The heredity monarch of the Olympics, Mr Seb Coe said 'we should never have tried to hold the games in such a country. We will now take the Games to a good and honest nation such as the United States of America. This was greeted by much sabre rattling in The progressive Republic of Saudi Arabia as they had wanted to hold the Games. The democratically sensitive Kings of Saudi Arabia felt they had as good a human rights record as China and a lot better than America as the Saudis let their prisoners wear whatever color boiler suits they like, not just orange. Why couldn't they hold the Olympic Games? Regal Coe said he felt it was difficult for the Saudis to hold anything as the majority had had their hands lopped off.