UnNews:Barack Obama named "number one contender" for the White House 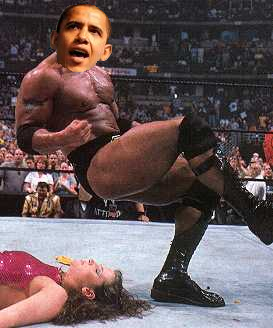 Barack delivers the people's elbow on a Hillary supporter

Last night Barack Obama addressed a crowd of ecstatic supporters as he defeated Hillary Clinton to become the number one contender for the United States Presidency of the World. Hillary “the iron woman” Clinton had been leading the fight at the outset, however her failure to deliver an early knockout blow in Iowa gave her opponent crucial manoeuvring room. Obama, who has enjoyed unprecedented grassroots support and has been dubbed “the people’s champion”, fought back with a perfectly timed speech, that his supporters refer to as “the people’s elbow”.

With the critical victory secured at the end of the primary season, Obama returned to his hometown to declare his victory, announcing “Finally, Ba-rack, has come back, to Illinois!” Hillary Clinton seemed dazed by the end of campaign knockout, and seems to believe she has still won the contest.

Obama has now focussed his attention on his republican opponent John McCain, who he will be fighting in a one on one tables, ladders and chairs match that has been dubbed "election night". Their first debate was tense, with senator McCain attempting to introduce himself before Obama violently interrupted him, screaming “It doesn’t matter what you’re name is!” The two grappled over various issues, with McCain outlining his plans for tactical strikes on Iran, whils Obama proposed comprehensive healthcare for all Americans “even if they are jabronies.”

John McCain is a veteran politician and highlights of his long career include an “I quit” match against Charlie “the Viet Cong” Cobra, which lasted a record breaking five years. Many believe his experience will give him the edge in the upcoming election campaign.

“Battle for the White House” is a pay per view event available on Fox.