UnNews:Babies found to be source of all evil, government sponsored kill begins 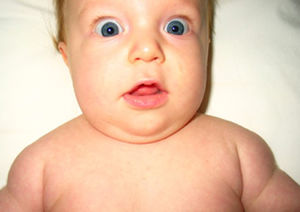 Living room floor, crawling towards your leg Babies, known to emit morphine-like chemicals that cause their parents to behave irrationally and speak gibberish have also been outed today as iddle biddle itty bitty pieces of evil.

World governments reacted swiftly. President Bush pointed out that all terrorists are, at a certain stage in life, babies. He then air-dropped babies around particularly sensitive oilfields known to harbor terror-babies. China cited it's superiority as a world power due to it's longstanding "One Baby" policy. Iran denied it had ever attached babies to long-range catapults. Israel has erected a wall of babies for "security purposes" but Palestinians keep chucking babies over the wall. In Zimbabwe, it has been argued that albino babies are far worse than regular babies. The Myanmar government flooded a large swath of land in order to "smoke out" a suspected network of rebel babies.

Religious leaders, appearing very old to distance themselves from the demonic nature of childhood, cackled hideously at the prospect of devouring their own children to prevent any of them from ever overtaking them.

Historians were simply shocked to be consulted about something, having been unemployed since the Great Historical Curiosity of 1825. Most just rambled on about previous historical happenings, making it clear that this is the first world-wide baby cull in history, possibly signaling a new era of world peace.

Rumors have surfaced that several people with feelings left are protecting their children from state-sponsored death. President Bush has hired assassins to lure babies into their vans with candy and crush their weak skulls with sledgehammers.

"I knew it," a common street prostitute commented between draws on her crack pipe, "Babies are so, like, 'wah wah wah.'"